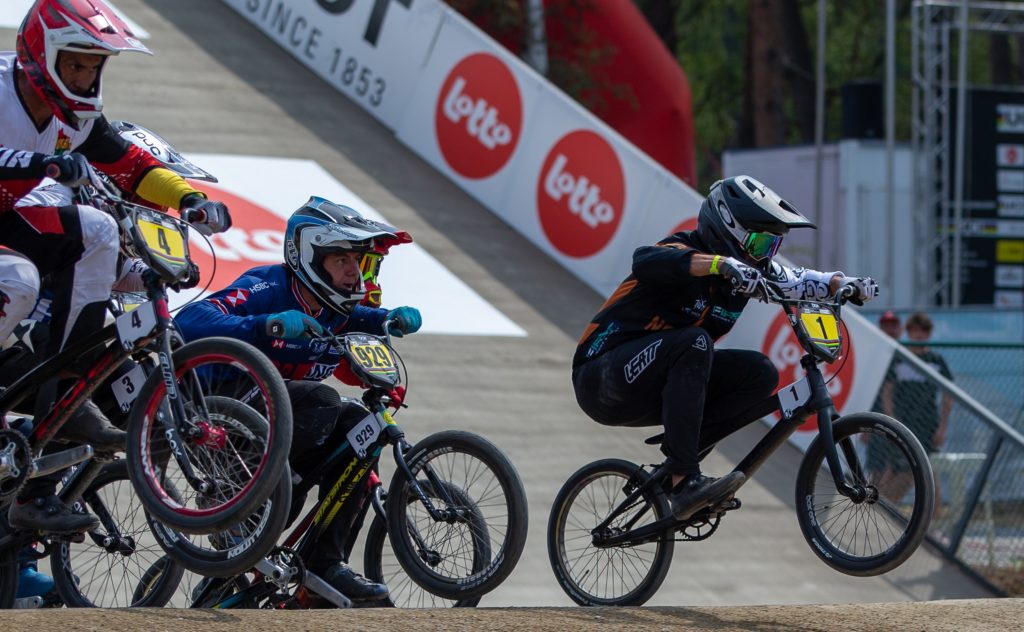 Tim Ferguson made a valiant defence of his Over 35 years title on the final day of Challenge Class racing at the BMX World Championships at Zolder in Belgium.

Ultimately the Cambridge rider had to settle for the runner-up position which was the sixth medal for the FIRST New Zealand team at Zolder.

“That was way worse than last year,” said Ferguson, who won the title at Baku in Azerbaijan 12 months ago. “I trained harder but that was way harder.”

Ferguson had every reason to be exhausted in the 35C degree heat, which admittedly was six degrees cooler than the Belgium record recorded yesterday. After three qualifying motos he won his eighth and quarterfinals, before finishing third in his semifinal.

He elected to choose the outside lane draw to stay away from the almost inevitable first corner crash. He made a great start and almost got the holeshot into the first corner, only to be denied by Colombian rider Gabriel Vallejo who he then tracked to the finish, never quite getting close enough to attempt a passing manoeuvre.

For Kelly there was some redemption after crashing out of the event 12 months ago at the motos stage. He looked good through the qualifying and quarterfinals, but only just made the final after a bad start in his semi-final. Another poor gate in the final saw him finish sixth.

Coker who had twice won the 25-29 years title in 2013 and 2014 elected to contest the Masters class which caters for former Pro riders. The now 33-year-old made the final by avoiding the carnage some of the former big-name stars of the sport inflicted on one another in the semifinals.

But he could not avoid British rider Scott Waterhouse, who crashed in front of him in the first corner of the final.

“It would have been nice to race the whole final rather than just the first straight,” said Coker, who could take some consolation in being one of only two Kiwis to make finals on both Cruiser and conventional 20-inch wheeled bikes. The other was Waitakere’s Toni James.

Attention now shifts to the elite championships, where Rebecca Petch and Sarah Walker are contesting the elite women, Jessie Smith in the junior women, and Rico D’Anvers and Tasman Wakelin in the junior men.