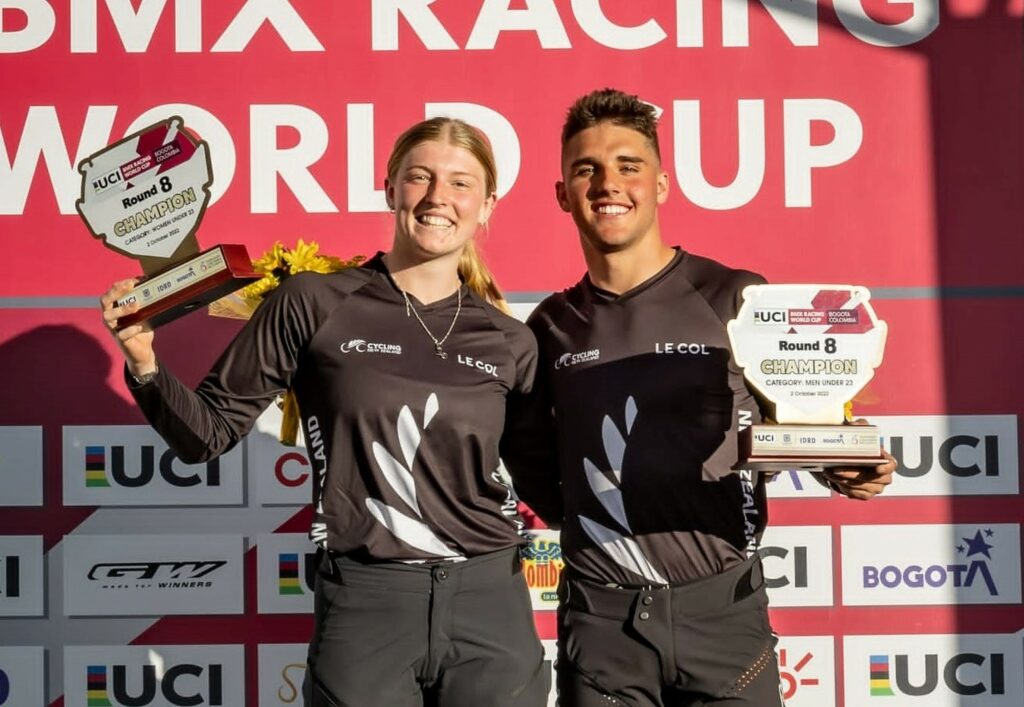 New Zealand BMX teenagers Leila Walker and Rico Bearman are on top of the world after both won their respective under-23 titles at the final round of the UCI BMX World Cup in Colombia today.

Walker, in her first season in World Cup action, finished runner-up in the first of the double-header final weekend in Bogota yesterday, pipped by Latvia’s Veronika Sturiska in a closely-run final.

Bearman was also impressive on the round seven action yesterday, winning his quarterfinal and placing fourth in his semifinal when 0.7s covered the top four riders, earning him the last spot into the final. He missed the gate by a fraction in the final and while he fought back strongly, the North Harbour rider had to settle for fourth.

It was a different story for both young kiwi riders in the final round 8 racing today.

Walker was unbeaten on the day, winning her qualifying, and straight into a semifinal before nailing the final, winning the start and was first to the first corner. >From there she held off a fast finish by Sturiska to earn her first World Cup victory and reverse the podium from the previous day.

The Cambridge teenager has finished ninth overall in the season rankings despite only competing for the first time in the two double rounds in Bogota, after a super-successful time winning multiple age group world titles.

Bearman enjoyed a superb day, when he won his qualifying round and then reeled off wins in his first-round, the quarterfinal and semifinal.

This time the North Harbour rider saved his best until last, nailing the gate in the final, grabbing the holeshot and holding off all opposition to win in a blinding time of 32.548s, the fastest of the day.

He has finished second overall in the under-23 men’s world cup rankings behind the world champion Leo Garayan (France).

In other racing national elite champion Michael Bias did not have the same top form as last weekend, missing out in the qualifying round on Saturday and edged out in the first round today, to finish 20th overall in the World Cup standings.

Fellow elite rider Cole McOnie from Te Awamutu found himself one spot out of qualifying for the finals rounds on both days.

Of the other under-23 riders, Bennett Greenough (Cambridge) made it to the semifinals where he was edged to fifth to just miss out on his first final on Saturday and today went out in the one-eighth round.

His brother Jack qualified on both days and in both cases was pipped on advancing, finishing fifth in the quarterfinals in a strong showing, with Bennett finishing 35th and Jack 39th in the overall world cup standings.