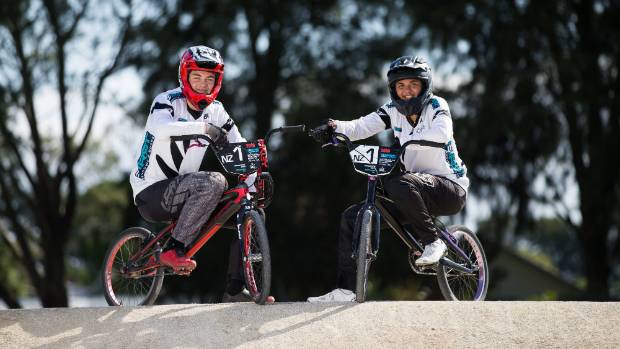 The efforts of two of Waikato’s rising stars in BMX have paid off.

Hamilton students Cailen​ Calkin​ and Jessie Smith have been selected for the 2018 Summer Youth Olympic Games, held in Buenos Aires in October.

Their journey towards the international event has included a couple of spills, a social life on hold, and a motivation to pursue their passion.

And Jessie, a student at Hillcrest High School, said she’ll be having her “eyes on the prize” when it comes to participating on the world stage.

“It has been hard work but work that I love. Training everyday, every week is definitely very demanding but it’s worth it,” she said.

“Being selected means a lot to me. It shows me that my hard work is paying off and that one day competing in the Summer Olympics could be reality.

“I know how privileged I am to represent my country at the highest level in my career so far.”

Jessie began working towards the Youth Olympics less than two years ago. She has garnered an array of results since her passion began in 2005, and is now under the tutelage of Kiwi Olympian Sarah Walker.

She is also being coached by professional BMX rider Matt Cameron.

Jessie hopes to medal at both the Youth Olympics and the 2019 BMX World Championships.

She has the desire to become one of the fastest female BMX riders in the world and represent New Zealand at either the 2020 or 2024 Olympic Games.

Cailen’s​ eyes will also be fixed on a podium finish at the Youth Olympics, and he is hopeful any successes will act as a pedestal to highlight issues surrounding mental health.

Sparked by a desire to help people suffering from depression or anxiety, Cailen’s​ passion for BMX is directly related to his interest in psychology.

“If I do well, it will give me an opportunity to share what I believe in. I just feel like this could be a time where I could help, so it’s given me motivation to train.”

Cailen​ has witnessed friends suffering from depression and anxiety, and wants to help break the stigma surrounding asking for help.

He, too, admits he has felt the pressure in his sport.

“A few months ago after the World Champs, I came home, didn’t really ride much, and when I got back on the bike, I wasn’t doing well.

“I literally asked myself why am I even wasting my time doing this. What’s the point?

“I’ve counted myself out a lot of the time but I’ve learned that one of the strongest virtues you can have is hope, because with hope, you can do anything,” he said.

“If you don’t have hope, that’s when people start to give up and not see the full potential within themselves because they’ve convinced themselves they are not good enough.”

Cailen​ has been working with sports psychologist David Galbraith and trains at Hamilton BMX Club at Minogue Park, alongside Jessie.

BMX racing became an official Olympic sport at the 2008 Summer Olympics in Beijing.