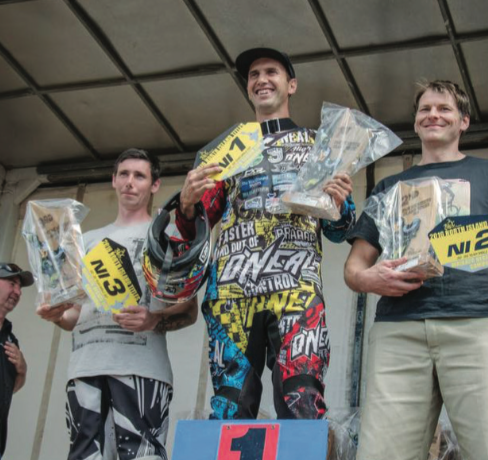 I meet Stevie-Lee Reuben 6years ago she was 9 years old. I was coaching at the local Hawkes bay BMX track and It soon became apparent that she had something special, the ability to race with the boys and the ability to learn the skills very quickly. I had seen Stevie grow as a rider and her achievements NI1, O1 and Mighty 11 captain. We have trained together through all those years and our friendship has grown. She was a very shy girl at the start transforming into a very intelligent and cheeky character. Although I am old enough to be her dad we have a unique friendship which I think is because of our very similar upbringings in life and BMX. The North islands titles 2016 has made our friendship and time collide and here’s the story of our due Success.

It has been a long time since I have come 1st at a North island Champs, 22 years ago, to be exact were I won at age 15 the same age Stevie lee has just won her current title. My training his year had one goal to not come 2,3,4, or 5th ever again and if I did it would only be because the others were better riders not because I didn’t train enough. My job requires me to work lots sometimes for 3 days straight with no sleep so to fit training in I need to be dedicated. I started with training at 6am every day followed by track training in afternoon or sprints/gym seasons if possible. During that day, I would also play with my 3 kids afterschool because I’m a cool dad but bit also keeps me fit. Coming up to the norths I was super busy but made sure my training got done. I did hot laps lots and by the time the norths came around I was sprinting past the finish line 50mtrs so I knew I was ready physically.

I was ready for the norths both mentally and physically. I knew I was the fastest I had ever been which meant whatever happens is going to happen which was a good place to be in. I knew I had a dead man final so I used the moto’s to develop spots on the track I would need to hit in the final. This year I worked on the third straight a lot, I made sure I had it dialled by jumping though.

When the final came around I was ready I knew anything could happen and I was in the best shape to be competitive even against the man Tim Ferguson a rider I regard as one of the best. I got ready in the usual way stretching, light warm up on Amy Martins Rollers and visualising the race and me wining from the gate to finish line. On the hill, I said the words I always say and relaxed. The gate dropped and I came out the gate the worst of the whole event but I keep my head and got the downs on the first straight to pull into second. The second straight is still a slow-motion replay in my head, I see Tim transferring his body weight early and tagging the top of the jump I was hoping the bike would not land in my path and it didn’t, luckily for me as I didn’t have time to brake not that I would have anyway. As soon as I got to the second corner I knew

I had it lock down as I had the next section of the track dialled. I still made sure I pedalled to the end and got the win as I didn’t what second. Stoked is the word I use and little did I know my stoke was about to get blasted 10 fold.

Her story leading up to the north islands was tricky also for Stevie. Fred her father had moved to work away from home only coming back for weekends which meant track time would be a factor in a lead up to the Norths. But her mum Shannon did everything she could to get Stevie to the track.

Stevie had also been training hard pushing herself at the gym working with Bede Jeffries who has worked alongside Lydia Ko and some other great athlete’s as personal trainer. Leaving straight from school and going directly to the gym most days Stevie kept focused and didn’t miss a training pushing Herself to a new level of tness and Strength. For Stevie, there were less than 8 riders so the north island title would come down to points over the moto’s. Stevie knew after the first day of racing that she was in good shape to take the title only her friend and fierce opponent Baylee Luttrell stood in her way. The first day was good for Stevie and between her and Baylee they swapped first and seconds. Then the second day saw a fierce rivalry between the two girls which made it very exciting to watch except for her mum and dad who were biting their nails. The moto before the final Stevie could by winning the race win the title. Stevie started on the inside of Baylee and won the hole shot to the first corner. On the second straight Bayley came across and shut the door on Stevie and followed it up with the win holding the lead to the finish.

Stevie came back to the club tent at this stage and she was angry with herself she knew that was a good chance to have won. Now this is where a true champion is made.
I had a few words with her they went something like this. Stop it SLR there is one more race, you have got this, you have done this before and you are going to do it again. There was some track related discussion about lines and to cut first on the corner and own it. I knew she would listen just like that 9-year-old girl I trained so many years ago. The final was raced to perfection, the race went as planed and on the second corner the move was set. Stevie cut first and pushed across down the third straight not fast enough for me or the Hawkes bay club members watching but in the end getting in front by the corner and pedalling hard to the nish to take the win.

We were both super stoked and took some cool photos which I will bring up in future stories. hopefully the stories start with I know that girl I was her trainer once and she learnt it all from me ha-ha.

The week after the nationals I picked Stevie-lee up from her house and we both went street riding together and talked about the future of BMX. We both agreed there will be some good times to come both hard yet rewarding and we talked about Future goals.

Jason to win world title and race competitively in superclass events working on tness and strength to get faster. Stevie to grow into an elite rider and set the bar high for NZ female riders on the world stage.

Both of us to help other riders both young and old develop their skills And to have some similar experiences like the one when both had at the 2016 North island champs.

Watch for us at the New Zealand Champs as we both will be there to win and take an NZ1 and maybe add to our friend success.