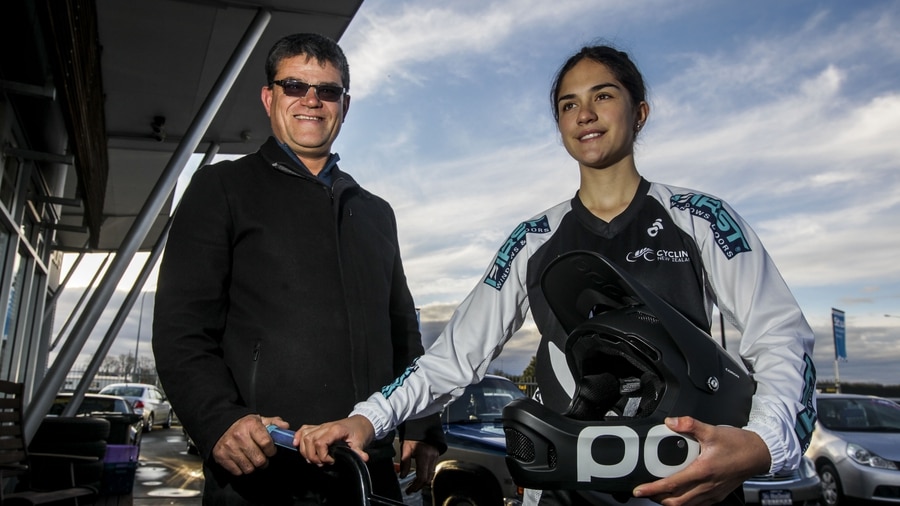 Eating isn’t just an emotional escape for Stevie-Lee Reuben when she takes her place at the dinner table at home in Napier – it’s actually a discipline.

That’s because her mother, Shannon Reuben, is a chef at Design Cuisine operating out of Hawke’s Bay Club in Napier who whips up a chicken fettuccine to die for, among other delights.

But what’s eating the 15-year-old is the thought of what will be served on the plate when she joins the mobile unit of the Berm Academy, which Jason Carne is driving during the UCI BMX World Championship in Rock Hill, South Carolina, in the United States from July 25 to 31.

“I’m really excited [but] I’m taking a risk [with food],” says Reuben who jets out of Auckland today and is game to rough it out.

“It’ll be like good food because I don’t really eat that well.”

Nevertheless, the teenager knows what she digests from former BMX champion Carne will be equally nourishing for her sporting ambitions.

Partial to red meat, pasta and vegetables, she has been training with Hastings coach Jason Waite since the Easter weekend for the world champs, her second after she competed in her maiden one in Auckland in 2013.

Her parents, including father Fred, a forestry worker, and relatives, were there to cheer her on in Auckland but she crashed out in the semifinals to finish seventh in her age group.

It’ll be the Napier Girls’ High School pupil’s second trip away as a rider without any family members or relatives as support crew. She did it by herself for the International Children’s Games in Australia in 2015.

Reuben will compete under the banner of Daylight Cycle Company, a US-based firm, as one of three factory riders from New Zealand. Logan Hall, of Hamilton, and Bayleigh Rees, of Auckland, are the others riding under the brand.

The national No 3 and under-15 North Island champion is a member of the JJJ BMX Dalliston team, the national racing arm of BMX Hawke’s Bay, here that Jason Troupe, of Hastings, headlines.

Reuben, a year 11 pupil, is bracing herself for the 31C welcome to Rock Hill from the winter climes here for the 16-year girls’ event that is likely to have a field of about 30.

If that isn’t enough heat, she will be lining up against defending champion Jordan Scott, of Nevada.

Reuben is quietly confident she has what it takes to give Scott a run for her money.

“Coolness,” she says is vital when she tries to tame the Olympic-calibre Novant Health BMX Supercross Track which offers elite and amateur start hills and pump tracks.

She doesn’t consider it a slight on her species but Reuben reckons she’ll have to ride like a boy to do the unthinkable against Scott who travels with her brother every weekend to race.

“I could get more aggression,” says Reuben who believes boys tend to ride with more style and are smarter in their approach tempered with reckless endeavour.

Ironically her flirtation with BMX began with older brother Taine, now 18, but he didn’t take a shine to it after she saw an uncle, John Parsons, of Rotorua, and his son, Finn, competing in Gisborne when she was 10.

Her goal is to make the final cut at the worlds and then que sera, sera for someone who gets her kicks out of jumping and winning in BMX.

Reuben believes her gate starts need improving and she has to build the muscles in her legs for more strength.

She has taken “approved leave” from NGHS to travel. While most children have been living it up in this school holidays she has been swotting to complete her quota this week.

Her only mishap, a concussion, was in 2014 when she smashed her head at the lip of a jump.

That accident dented her confidence for a few months but she found it again and never looked back.

For that reason Reuben, who has 2020 Tokyo Olympics aspirations, is indebted to Stu MacDonald for donating her the latest “high-value” helmet.

The owner of Stu MacDonald Motors in Hastings, a former BMXer from the 1980s, has helped JJJ club buy uniforms for the past two years.

Troup says anyone who mentions BMX when buying a vehicle at the car yard will automatically pledge $200 to the club.

After the worlds, she will continue to race as part of the Daylight Cycle team at the Grand Valley BMX Nationals in Grand Junction in Colorado.