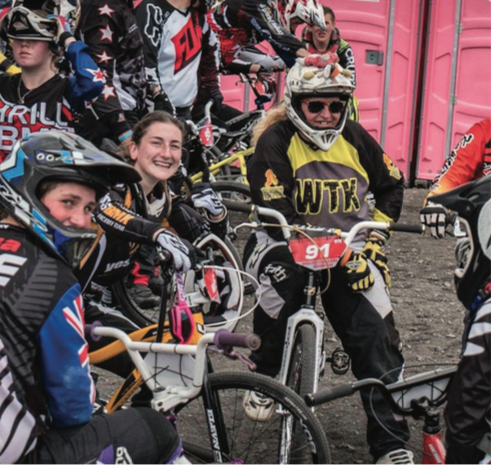 After torrential rain in the two lead up meetings, the weather gods were smiling over Labour Weekend for the 2016 North Island BMX Titles staged at the Cambridge BMX Club.

With the track looking absolutely spectacular and racing to match it’s good looks, the 550 riders on course provided high quality racing over the two day meeting.

Kicking off on the Thursday evening, a very well received and at times emotional Mighty 11 dinner, set the tone for what turned out to be a highly successful weekend of BMX racing. With the presentation of their national racing shirts, the 16 representatives of the latest crop of Mighty 11 riders proudly prepared for battle.

Saturday’s qualifying moto’s saw good, hard racing with everyone pushing hard for good points leading into Sunday’s finals day. Super class racing gave some of us the first opportunity to see New Zealand’s first Junior Elite World Champion, Maynard Peel race since his triumph in Columbia. His battles with Michael Bias over the big pro section delighted the big crowd in attendance. The ladies also battled hard on day one with Rebecca Petch, Hannah Sarten and Zoe Fleming all pushing hard for the podium.

The first of the Mighty 11 points were handed out, and the 8 Kiwi riders dominated their Trans Tasman counterparts. The boy’s team, captained by Jack Greenough, rode superbly as a team to lay the platform for a comfortable lead at the day’s end. The girl’s team, headed by 4 time World Champion Leila Walker, also all rode magnificently to all but sew up the series after only 4 races.

Sunday dawned an absolutely spectacular day for elimination finals. As riders battled for those coveted top 4 positions to advance to the next round, it saw more than a few surprises and upsets as racing got tight. As always, the finals brought out the best in the deserving 8 riders in each age group, as well as their very nervous and enthusiastic support crews on the side lines. New Zealand confirmed their first day’s efforts in the Mighty 11 contest by winning both the boy’s and girl’s trophies.

At day’s end after the last person had left, it gave us time to sit down and reflect on what had been an extremely successful North Island Titles. No less than 5 World Champions on show, more than 30 Australian visitors competing and multiple NZ #1’s complimented the numerous first timers at a major event. Every thing ran perfectly, and that can only happen if you have dedicated volunteers who give their time to make such events work. To those who helped out during working bees, setting up and packing up, track maintenance and putting their hand up as an of official, I thank you.