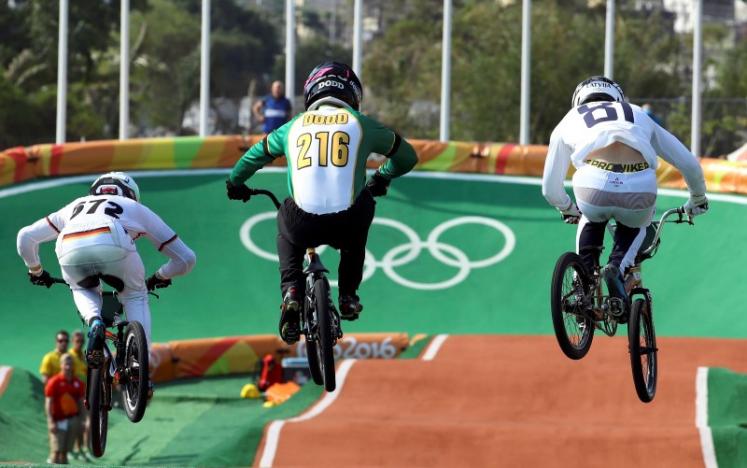 Maris Strombergs criticised the Olympic BMX course after his hopes of a third consecutive gold medal were blown away in the accident-marred men’s quarter-finals on Thursday.

The Latvian, winner in Beijing and London, crashed heavily in the first run of his heat, tangling with Britain’s former world champion Liam Phillips who took no further part.

Reigning world champion and gold medal favourite Joris Daudet also crashed in the second of three runs in his heat.

He battled on gamely and rode the third run but failed to qualify, saying afterwards he thought he had broken his elbow.

Strombergs, so popular in Latvia that a postage stamp was printed in his honour in 2008, said organisers had not acted on suggestions he made after this year’s test event.

Although he did admit the gusting winds at the X-Park in the hills behind Rio had contributed to the mayhem which turned the day’s action on the sharp curves and jumps on the 399-metre course into a demolition derby.

“It was the wind that was a big factor, a tail wind down the first straight was the complete opposite of what we needed,” he told reporters when initially he thought he had scraped through to Friday’s semi-finals as one of the top four in his heat.

“The first straight is too small. I told the guys four months before the race it needs to be changed because the second double (jump) is way too small but they didn’t do anything,” he added.

“It doesn’t look right so many crashes. I did three very ugly laps today. I wouldn’t even call them laps.”

At that point, a member of his coaching team informed him that he had failed to make the cut.

“Oh, I didn’t make it,” the 29-year-old, who carried his country’s flag at the opening ceremony, said.

“It is what it is. I don’t think much would have changed even if I raced tomorrow.”

Pushed on what exactly was wrong with the spectacular red and green course designed by American Tom Ritzenthaler, he added: “I said they needed to change the second double.

“It’s too kinky, too lippy and you can’t go full speed because you overshoot it every time.”

Daudet, who won the worlds in Colombia this year, shrugged off his disappointment.

“It’s what we say, it’s BMX, anything can happen,” he said. “Today I crashed and it was the end of a good story. It’s sad, but I’m alive and I will come back.”

He hit the ground so hard on the second run of his heat that a wheel broke off his bike and he proceeded to limp around the course carrying his mangled machine.

Remarkably, he did enough in run three to qualify.
– Reuters