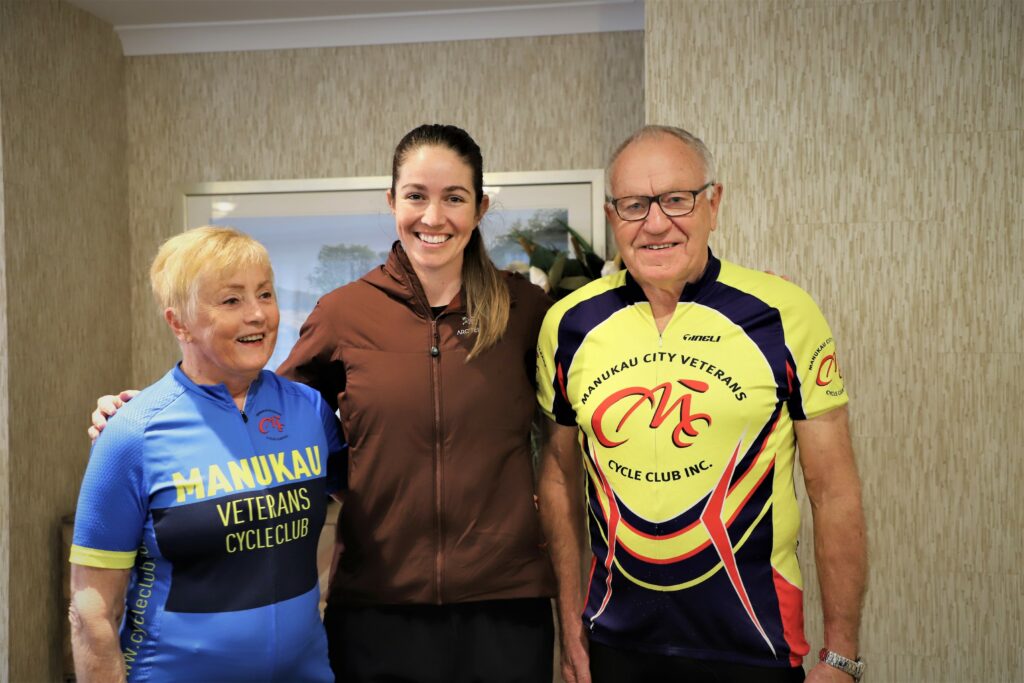 It was hard to tell who was more inspired by who when Kiwi BMX bike star Sarah Walker visited Murray Halberg Retirement Village to encourage the Olympics@Ryman athletes.

Sarah watched on in awe while cyclists Jane Jackson and Doug Shadbolt went through their pedalling paces in front of a very enthusiastic and vocal audience before having a turn herself.

Jane and Doug are competing in the world’s first international retirement village Olympic Games, which is bringing together 12,500 Ryman Healthcare residents across 42 villages in New Zealand and Australia.

More than 700 residents have signed up for the Olympics@Ryman which involves lawn bowls, cycling, relay walking, swimming and Quiznastics.

Using Zwift technology, cyclists ride a stationary bike while watching a screen which shows a course in Japan that they ride, complete with scenic shots which detail every last bump in the road, whilst also tracking the progress of their competitors at the same time.

Speaking to Jane and Doug afterwards Sarah said: “I admire you both so much, it’s so cool to see.

She added: “It’s about being active and giving it a go and I’m so impressed. These guys to me are Olympic level athletes!”

While Doug and his wife Gaye had followed Sarah’s career over the years due to their grandson also competing in BMX competitions as a young boy, Sarah was keen to find out more about Doug and Jane’s sporting careers.

Jane told her about her career as a competitive race walker representing New Zealand at the 1990 Commonwealth Games before she switched to running and then biking, partly due to an injured hamstring but also ‘because you can go faster’.

Jane also swims and loves triathlons and that inspired her to enter all of the events for the Olympics@Ryman.

“I signed up for as many things as I can do,” she said.

Like Jane, Doug is a member of the Manukau Veterans Cycle Club and has competed in numerous cycling and ironman events over many years.

“I used to run but that takes a bit of a toll on your body so I took up cycling. It’s very important to keep fit for as long as you can,” he said.

As soon as he heard about the Olympics@Ryman he jumped at the chance to sign up.

“I’m keen to take home the gold – why wouldn’t you?” he laughed.

It wasn’t just the athletes that impressed Sarah, the supporters left her equally dazzled!

Jane and Doug admitted that the loud cheers, chants of Murray Halberg, and general whooping and hollering added to the sense of support and camaraderie and galvanised them to give their best performance.

Sarah also got a taste of it when she stepped up to take a turn on the bike.

“I was absolutely blown away with the amount of excitement and the cheers, enthusiasm and effort going on,” Sarah grinned.

She missed out on selection for the 2016 Summer Olympics due to injury – the scars from which she still bears today – and having missed out for competing at the Tokyo Olympics she is relishing a new role as athletes representative instead.

“That’s a pretty cool opportunity and not a bad silver lining at all.”