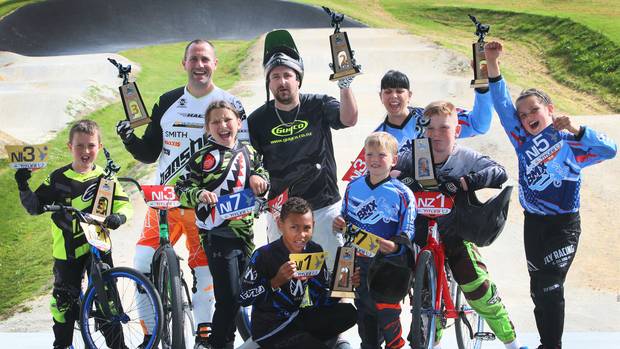 For a small club in Northland where budding riders learn from experienced hands, winning a number of gongs at the recent New Zealand BMX North Island titles was no small feat.

There’s some serious talent at the Whangārei BMX Club which fielded 27 athletes— the youngest being 4-year-old Taylor Buchanan— at the competition held at Mountain Raiders BMX Club in Pakuranga over Labour weekend.

“For such a small club our results are a true testament to our riders, we are two hours away to any other club so we rely on the experience of other club riders to train each other. For us to have two riders with North Island wins is amazing,” she said.

The two-day event attracted 498 competitors, including 42 from Australia, and all riders were divided into age groups.

They battled it out in six races, followed by the quarterfinals and semis with the top eight riders given a North Island title and the top three receiving trophies.

Luke, 10, is pleased with his recent win and has set his sights on a top three finish at the world championship abroad after “bad luck” followed him in both events previously.

While competing amongst 3000 riders in Belgium in 2015, he crashed in the knock out round and was unlucky in Colombia a year later.

“I came seventh in Colombia after taking another rider out,” was his honest-as-a-mirror account on his performance.

“Something bad happens always but I am hoping for a top three finish in Belgium next year. Hopefully no bad things happen this time round,” said the St Francis Xavier School student.

Lance Dinsdale has been riding BMX for about 10 years and initially did club races for two to three years before competing outside Northland.

“A work colleague said I should get into BMX riding and I said as a joke ‘I’ll come out and smoke you’ and it took off from there.”

He has competed in the world champs at Auckland’s Vector Arena in 2013.

The Whangārei BMX Club is encouraging people interested in taking up the sport to come to race nights on Wednesdays starting at 6pm or check out the club’s Facebook page.

The club is organising a School Challenge on December 1 as a way to introduce BMX to school-aged children.

“This enables kids to try a new sport in a fun, friendly environment with their school peers. Also they get to battle other schools to earn the title and a very large trophy.

“Our club riders will showcase their skills off the 6-metre ramp, as on the day all challenge riders will be starting on the pedallers mound. BMX is a family-orientated sport, hopefully this will encourage more families to join our club.”