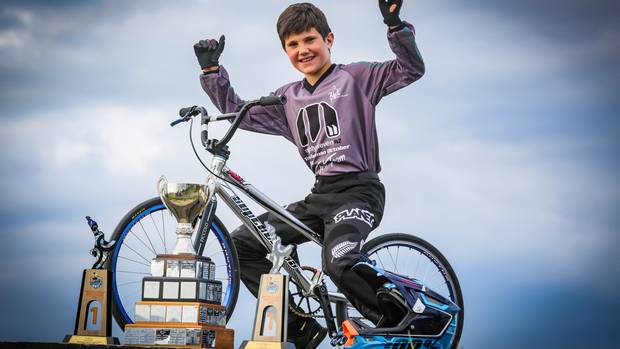 Hawke’s Bay BMX rider Tyler Waite had an extra incentive when he captained the New Zealand Mighty 11s team to victory against their Aussie counterparts in Auckland last weekend.

“I was dedicating my weekend to Uncle Cameron,” Waite revealed after returning from the Kiwis’ 107-88 victory.

His uncle died suddenly on August 7. He was 36.

“Uncle Cameron was in the Mighty 11s team which won in 1993. His daughter, my cousin Kiera, was in the winning girls team last year. I was pretty keen to carry on the family tradition,” 11-year-old Havelock North Intermediate School Year 7 student Waite explained.

It was the first time the Kiwi boys team had won the Trans Tasman Trophy since 2016. Each country fields a team of four riders and one reserve and points are accumulated from five races over two days.

Waite was the only Hawke’s Bay member of the Kiwi team. In March he was the reserve for the New Zealand team which lost their fixture across the Tasman.

Waite, who has been a BMX rider since he was four, was named captain after winning the trials. For a month after the trials he travelled to Auckland each weekend for training with the national team which was coached by Taranaki-based mentor Clive Telford.

In Auckland Waite recorded a fourth, two fifths, seventh and eighth placings. Races were streamed live and had more than 8000 spectators on both sides of the Tasman.

“My main job was to block,” Waite said.

Part of his role as captain involved a formal dinner speech and a performance in a team haka in front of a crowd of 800 including a live stream camera crew.

“The riding part was a lot easier than the speech. I spent a month rehearsing the speech,” Waite said with a laugh.

He pointed out there were plenty of crashes during the races.

“In the first race three of us Kiwis came off. That put us way back on the points table. We had to hit back hard and we got there in the end. We took the title with first, second, third and fifth placings in the final race,” Waite said.

“I had one of the biggest crashes of the weekend but I just got up and kept riding,” he recalled.

His uncle would have been proud of his commitment.

Waite isn’t the only member of his family to shine in major events this year. His father Jason, the Hawke’s Bay BMX Club chairman, and nine-year-old sister Millie won North Island titles in their respective age groups earlier in the year.

“There are names of numerous Kiwi and Aussie Olympians on the Trans Tasman Trophy. My long-term goal is to compete at the Olympics one day,” Clive 10th grade rugby player Waite said.

Waite keeps fit for his BMX pursuits with his cross country commitments with the Hastings Harriers Club. He finished second in his age group at the Hawke’s Bay Cross Country Championships.

“I’m lucky I’m little and skinny. I’m able to fly on my bike and when I run. I eat lots of food which gives me plenty of fuel,” he added.

His next major BMX event will be the Auckland-hosted nationals in March. After his success as a Kiwi captain in the big smoke last weekend he’ll have plenty of knowledge of the Auckland track and will be well placed to give a podium finish a serious crack.