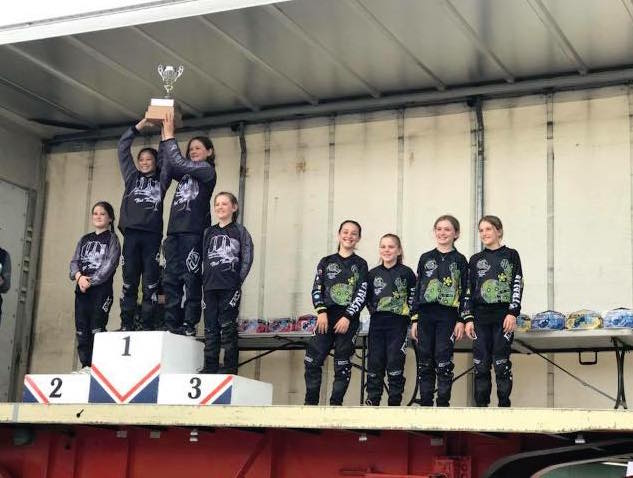 They and Mighty 11s teammates Greer Hall and Sacha Earnest reclaimed the trophy from their transtasman rivals in a hard-fought junior test.

Jaydah-Lily, from Whakatane, and Kiera, from Tauranga, were representing the Tauranga BMX Club when they competed at the titles event as part of the Mighty 11s.

The pair were the first second-generation Mighty 11s team members since its inception, following in the bike tracks of their fathers – Jaydah-Lily’s dad Hayden Moore and Kiera’s dad Cameron Waite.

Jaydah-Lily said taking out the competition was “cool” with her favourite part of the event being when she was heading to the podium with everyone cheering for her and her teammates as they collected their trophy.

She said was really happy and excited to have been able to achieve the goal she set.

Moore said the girls worked hard and came together as a team perfectly and he was proud they had achieved their goal.

“They would never of won it riding as individuals as each race they had a roll to do and it was just putting together what their coach had coached them to do in the month of training together,” Moore said.

The prestigious Mighty 11s team consists of New Zealand’s top four 11-year-old girls and boys, taking on Australia’s top four boys and girls. The challenge takes place twice a year, with those who competed last weekend being selected for the team from a trial in September. The next trial is scheduled for Easter.

“Kiera was brought in at the last minute because one of the girls broke her arm, she jumped up to the challenge.

“It’s an amazing experience for that group.”

Cheesman said the team members would get the chance to take the trophy home for about a month each.