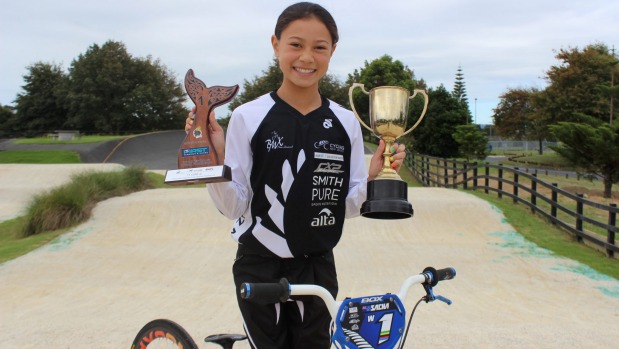 A 10-year-old BMX world champion is on track to becoming a New Zealand sports star.

The Ellerslie resident cleaned up at the BMX New Zealand Nationals over Easter weekend, winning the 11-girls age group, as well as the SuperNats junior females title – a race for girls aged nine to 11.

That gave her a spot on The New Zealand Mighty 11s side to compete in Australia. The side is made up of four boys and four girls who are 11 years old as of June 1.

Executive officer of BMX New Zealand, and Sacha’s dad, Dion Earnest said the Mighty 11s had fostered some famous talent across the years and was a good stepping stone for future stars.

“We’ve got Commonwealth Games track cyclists, world champion mountain bikers, all of whom went through BMX and the Mighty 11s,” Earnest said.

For the event girls and boys work in separate teams, something not usually allowed in regular BMX races.

Some will block, others will sprint, as they try and gather points across five races against the Australians.

“It will require a whole lot of tactics you don’t normally see in BMX,” Earnest said.

While Sacha carries the world number one crown, the team event will test a different side of her ability as she rides in as captain of the squad.

She attends St Kentigerns Girls in Remuera and fell in love with BMX when she was just four years old, and thanks to some inspiration from her mum and dad, has been riding ever since.

“I love the jumps and all the skills you can do, and going fast,” she said.

“I want to try and make it to the elite level and go to the Olympics.”

While she’s been competitive from the outset, her mum and dad decided to give her a season break from international competition last year after her world beating efforts over the past four years.

Dion said any sport at that level could put a lot of pressure on kids and it was important to achieve a good balance.