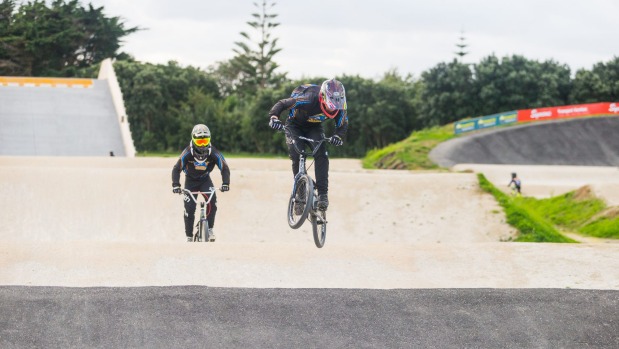 It’s taken 20 years for Taranaki to secure hosting rights for a national BMX competition but the construction of a new course has sealed the deal.

Not only has the new $600,000 world class track in Bell Block ticked all the right boxes to attract the 2018 BMX New Zealand (BMXNZ) National Championships, but the region’s riders have a competitive advantage, Taranaki BMX trust member Blair Riddick said.

“The new facilities are now relevant to what the rest of the country has,” he said. “The club is buzzing at the moment. It’s pleasing to see all the hard work pay off.”

Since the official opening of the new track about a year ago, New Plymouth and Hawera BMX Club riders have revved up their bicycle motocross skills and pedalled their way into last weekend’s national finals.

Held at Te Awamutu during Easter weekend, the event saw more than 1000 riders speed down dirt hills with 17 of them, Taranaki finalists.

While none placed first, Riddick was sure the new track would lead to gold.

“Having the relevant facilities will certainly help.”

And next year’s event would be “the most exciting thing for our sport, in Taranaki, ever”.

Riddick launched the call for the facility upgrade in 2006 when the New Plymouth BMX Club was told by BMXNZ that its track was no longer adequate to host a national event.

“The old track at Marfell had a small start hill, no tarmac corners and no long straights,” Riddick said.

So he sought help from council and the community, raising the $600,000 needed to construct a world class track by Elite Trax – an American company that has built the last three Olympic tracks and most of the BMX super tracks around the world.

“The biggest selling point was that it would attract bigger events to New Plymouth,” Riddick said.

“And as soon as we started building it, we got the nationals. It was straight away.”

The new course offers a five metre high start hill and Riddick said a professional sized eight metre hill was in the works.

“The facilities are now relevant to what the rest of the country has,” he said.

“I don’t want to put the Marfell track down but, I can’t quite say what it’s like to have this new one, it’s a real tickling feeling.”

Fans of the racing sport have also flooded the clubs in the last 12 months.