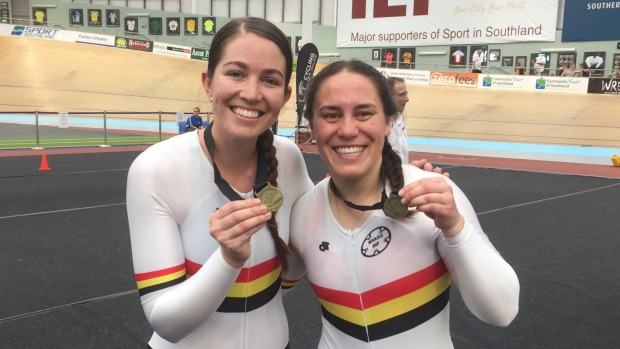 Remarkably, 28-year-old Walker has only been riding for two months, but managed to claim the NZ title in her first time competing in the team discipline.

Walker and Young won the women’s team sprint from their Waikato-BOP team-mates Racquel Sheath and Jaime Nielsen in 34.862 seconds, winning by .464s.

According to Walker it was an exciting experience to secure a team title.

“So cool, it’s the first team event I have been part of since I left high school, to ride with someone and share that moment with someone else has been really cool,” she said.

“My first practice was in qualifying and this was my second time, definitely better than the first race we got better from that one into the second one.”

Everything went right for the untried combination of Walker and former Southland rower Young who were the top qualifiers for the final.

“I nailed it, I feel we had really good timing out of the start and I went as hard as I could for the lap and I felt I got Tess in the position to just come flying through and she motored it home and we got a really good time,” Walker said.

“We were very close in qualifying, there was almost nothing in it, it was always going to be an interesting final, Jaime and Racquel, even though they are enduro riders and part of the team pursuit that were in Rio.”

“I would have had no idea how to train if I didn’t get help, I went and found Katie, she was in the NZ team for the team sprint last year and the year before and she has had so much experience,” Walker said.

The Waikato-BOP rider now returns to the BMX to focus on the World Cups and World Championships and has been benefited from two months of training in the track cycling discipline.

She will return to track cycling in Auckland as she tries to keep improving and make it into the New Zealand team for the Oceania Championships.

“At the end of the day, I may not be good enough to make the team sprint, but I will try, there won’t be any regrets or what ifs. I would rather try and fail than not try at all,” she said.