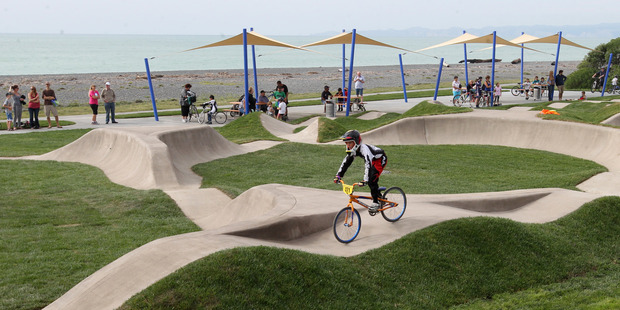 Tauranga is only months away from getting its first BMX pump track – expected to become a magnet for thousands of children from all over the city.

The collaboration between the council, Fulton Hogan and designer Pete Roden will be built at Gordon Spratt Reserve next to the skateboard park.

Mr Roden, who led the relocation of Tauranga’s BMX track from Sulphur Point to Cambridge Rd, was excited about the development because pump tracks were such huge confidence boosters for beginner cyclists.

He has been pushing for three years to get a track because they were such phenomenal drawcards.

“There are no rules, no timetables, just playing.”

It would be built inside an undulating oblong loop track for skateboards and scooters.

Eventually Mr Roden wanted to see a network of pump tracks around the city. In the meantime, he was putting his energies into getting one established in his rapidly growing home suburb of Papamoa.

“Once they get the hang of riding on a pump track, a kid’s confidence grows enormously.”

It was his second attempt to find a piece of dirt for the pump track. The first site behind Fashion Island was knocked back by a petition from mainly retired neighbours who he said had the wrong idea about the sort of kids it would attract.

Mr Roden said Fulton Hogan was the ideal partner for the project because of their construction skills and access to the base materials, clay and pumice.

He said all the momentum from pump tracks came from the rider pushing down on the front wheel as the bike went down the backside of the little humps.

“If you build it correctly, you don’t have to pedal. It is about the momentum built up from the bike going up and down.”

“I am an active BMX rider and I will be going down to muck around,” Mr Roden said.

Fulton Hogan’s regional manager Gavin Riddle said the track was a Project Tauranga collaboration with the council and would be built without charge by the company as part of its contribution to build communities.

“It’s for the young and young at heart.”

The project was meant to happen in the middle of last winter but Fulton Hogan ended up being particularly busy.

“We would like to see it done in the next few months.”

Mr Riddle said they had been in discussion with the council on how to make it happen. A Fulton Hogan staff member with young family had helped because of the way pump tracks taught children how to ride in a safe environment.

“There was nothing on that side of town that ticked all the boxes.”

The council’s Project Tauranga manager, Michael Vujnovich, said he could not wait to see it happen. “We are expecting it to be very well used.”

– Designed so cyclists never have to pedal