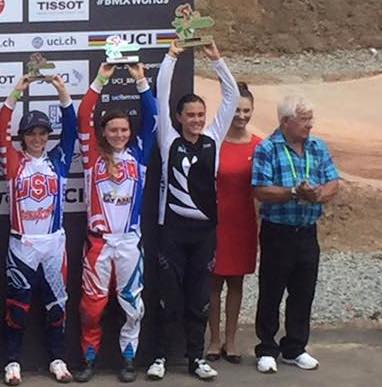 Hamilton’s Jessie Smith has added to New Zealand’s gold medal haul with victory in the Cruiser class at the UCI BMX World Championships in Medellin, Colombia.

The 15 year old took out the women’s 16 years and under title on the third day of the championships, racing in the Cruiser class, which are bikes with a larger 24” diameter wheels.

Pukekohe’s Holly Woodcock-Takarua also finished on the podium, finishing second in the 17-29 years age group, while Upper Hutt’s Caitlin Georgantas was sixth in the same final.

It brings the overall tally to eight medals including four world titles after the Challenge and Cruiser class races.

Smith, who rides for the team sponsored by Sarah Walker, built on her efforts in finishing fifth in the 15 years Challenge final yesterday. She had two wins and a second in her three qualifying motos before impressively winning her semifinal and the final.

Woodcock-Takarua, from the Sunset Coast club, was also fifth in yesterday’s Challenge final in the 17 years division. Today she won all three of her qualifying motos in the Cruiser division and was pipped in a closely fought final, to earn the silver medal.

The focus moves to the elites who will ride on the championship track across the highway from the Challenge track in Medellin, with qualifying and time trials on Sunday (NZ time) and elimination races through to the final on Monday.

The elimination stages from quarterfinals onwards will be broadcast live on Sky Sport from 8am on Monday (NZ time).