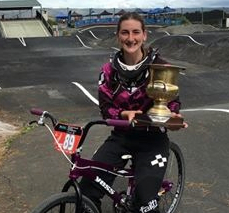 The 18-year-old from Upper Hutt recorded some of the best performances of her career this year, which culminated in BMX New Zealand naming her as their Sportswoman of the Year following their national championships on March 27.

At those national champs at the Sunset Coast BMX Club near Pukekohe, Georgantas finished second in the 13-39 age group of the cruiser class.

She had never won a moto (qualifying race) at nationals prior to this year, but won all three to qualify first for the final.

She said the final didn’t quite go to plan, but had a bit of luck to grab second place.

“I probably raced one of the worst races in my life in the final. The gate was quite slow at nationals, usually the gate is my strength, but I just did not get a good gate and was quite far behind at the start.

“I pulled back a little bit in the first corner and came out of it fourth. Down the second straight there were about four of us together and the girls that were leading took each other out on the next corner.

“So I was kind of lucky to get second, but at the same time I expected to ride a better lap than that after winning my motos.”

That result followed her silver medal in the 17-29 age group at the Oceania BMX Championships in January at the same track, an event where she also recorded a fourth place in the 20-inch class.

She said the Oceania results exceeded her expectations.

The Sportswoman of the Year award was awarded to her after nationals, and encases things such as performance, attitude and contribution to her club and the sport.

Her Hutt Valley Thunderbolts BMX club nominated her for it, but she didn’t expect to win.

“I was absolutely stoked with that, I was quite overwhelmed.

“A couple of the officials told me they were really impressed with my CV, I think a lot of the stuff throughout the year, getting an award from my school [Upper Hutt College] and Cyclist of the Year at the College Sport awards, did contribute to me winning that.

“Not a lot of BMXers win cycling awards, so I think that made a huge difference and my overall attitude helped they said.”

Next on her horizon is the BMX World Championships in Columbia in May, where she aims to better her injury-affected placing of 27th last year.

“I’m determined to beat last year’s result and at least want to make the quarterfinal.

“Ultimately the goal is to make the final, but I’ll start by trying to make the quarters and see where I can go from there.”