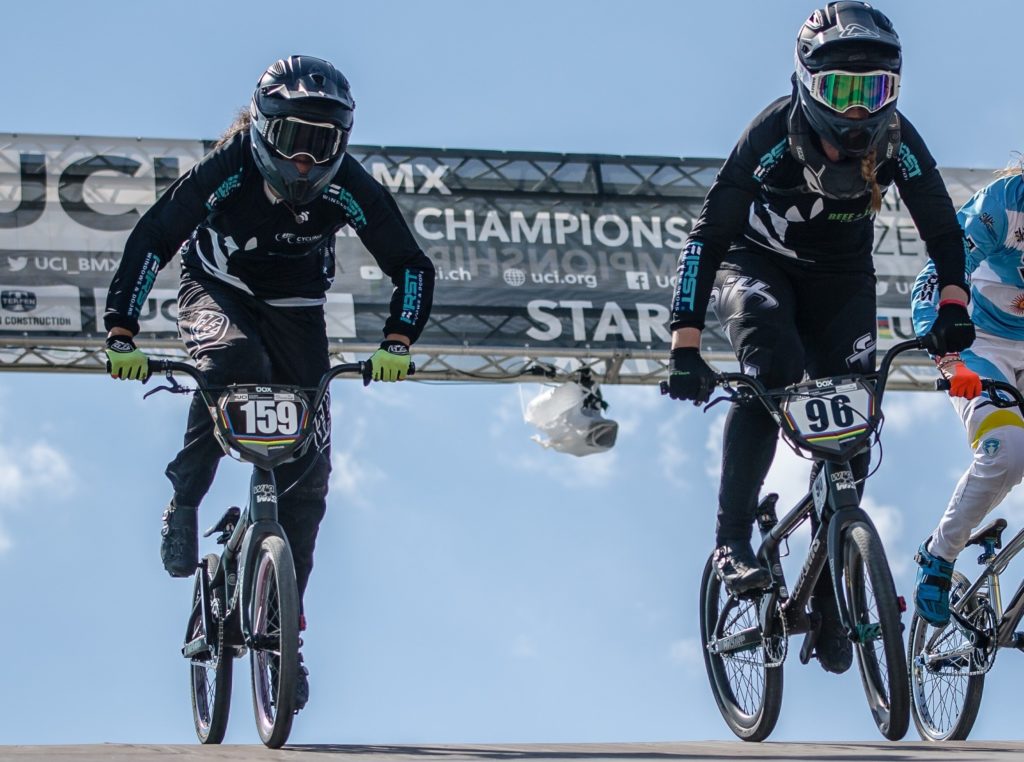 The New Zealand women’s trio, led by the indefatigable Sarah Walker, realise there is a potential pot of gold at the end of the UCI BMX World Championships in Belgium this week.

Walker and Te Awamutu’s Rebecca Petch will target a place in the elite women’s final at the Heusden-Zolder circuit while Hamilton’s Jessie Smith has podium potential in the junior elite class this weekend.

While individual success is the goal, there is a bigger collective ambition as New Zealand chase all-important ranking points towards qualification to next year’s Tokyo Olympics.

The New Zealand team return to Zolder, which hosted the world championships in 2015, when Smith won the 14 years Challenge world title, and Petch and Walker made the semifinals of the weather-affected event.

Currently New Zealand lie sixth on the nation Olympic ranking just behind Brazil, with the top five countries to qualify two riders for Tokyo when the qualifying period ends in June 2020. Presently New Zealand has Walker ranked 12th in the world and Petch 18thwith Smith still a junior elite, where she is currently ranked second in the world.

The Hamilton teenager is the highest ranked Kiwi rider this year on the Supercross World Cup circuit in 12th with one grand final to her credit, and no doubt she will make a significant contribution to Olympic ranking points once she moves up to the elite category.

For now, the target is this weekend at Zolder, where the track is incorporated along with other Olympic sports, inside the famed motor sport circuit that used to host Formula One races.

“The track has changed a bit since the 2015 world championships and since the European event earlier this year,” said Walker. “It is not massively big but it is technical especially on the third and fourth straightaways.”

While Petch and Smith have raced through the European season, the London Olympic medallist instead returned home, arriving back in Europe last week.

“I do not need a lot of racing and I opted to come back to Cambridge. It was good to have time at home and I was able to get in a really good block of training and have the benefit of access to my support staff.

“I have often had my best results off little racing. I know how to bring 100 percent to race day. My build-up has not been perfect but when have I had a trouble-free run over the last few years?”

This week marks 10 years since Walker won the world championship in Adelaide, with the 31-year-old still able to be competitive at the highest level of the sport.

“I have persevered through all the injury challenges and keep going. I guess I thrive on it. All I can do is turn-up, get the best starts possible, race fast and have fun. Success for me would be to finish with a smile on my face. If I do that then I will ride better.

“In reality the final is a goal. If I make that then anything can happen.”

Walker said that she has been impressed with the training form of Petch with the Waikato 21-year-old reaching the world championship semifinal in each of the last two years at Rock Hill (USA) in 2017 and Baku (Azerbaijan) in 2018.

Petch has made the quarterfinals in three of her six World Cup starts this year, and made it out of the qualifying moto in each round.

Smith, who races for the Dutch-based TVE Team that includes world champion Laura Smulders and Walker, has thrived in the World Cup elite atmosphere. She reverts back to the junior elite class this weekend, ranked second behind Switzerland’s Zoe Claessens and comes off a win at a European championship event.

“Jessie will have a lot of pressure on her but learning how to deal with that is something she will get used to. She is very capable of doing extremely well this weekend and has definitely put in the hard work.”

Walker said she is thrilled to have two young teammates performing well.

“One of the things I wanted to do in staying in this sport is to ensure there is young talent coming through to challenge me. I am excited for both Rebecca and Jessie this weekend.”

Challenge class (age group) racing starts on Wednesday (NZ Time) to Saturday with the one-day elite world championship starting with qualifying motos from 11pm (Saturday) to 2am (Sunday) and finals from 3am until 5.30am (NZ time).

The championship races will be live on SKY Sport, with live streaming of all other racing.