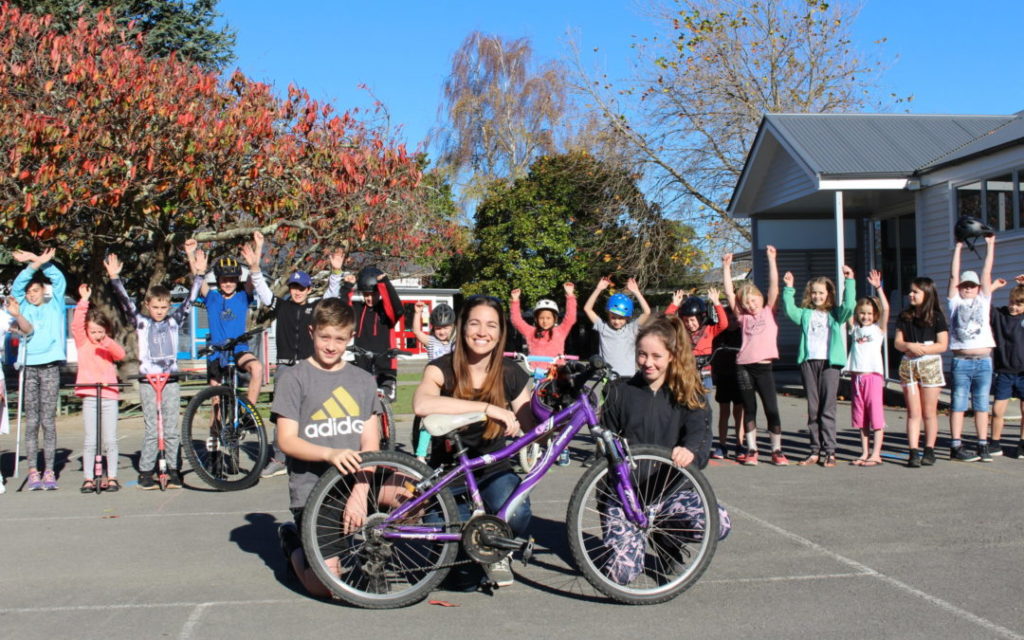 Greytown School pupils had a lot to look forward to at the weekend.

Not only did they get to meet an Olympic medallist BMX rider, but their “dream” bike track which will loop around the school, just got $15,000 closer to completion.

The story of Greytown’s bike track began two years ago, when the year six maths extension class at the school began musing over a problem.

They’d noticed that a lot of children at their school didn’t have confidence on a bicycle, and there were also a few pupils who didn’t own bikes.

After drawing up plans and creating a budget, the class presented a solution to the board of trustees.

Their idea was to create a bike track for their fellow pupils complete with a storage shed and 50 bikes of varying sizes for any pupil to use.

On Saturday the school hosted a fundraising dinner and invited Olympian Sarah Walker, who won silver in the women’s BMX at the 2012 London Olympic Games, as their guest speaker.

The night which also included a live auction, Wairarapa band Fleeced and a catered meal raised $15,000.

When added to grants the school has received, Greytown now has $40,000 to spend on the track’s development.

Deputy principal Neil Preston said the track would be a ‘legacy’ for the pupils, teachers and parents who had worked hard for it.

“We also see it as a community project where early childhood centres can come with their kids and use it,” Preston said.

“Weekends, after school . . . it’s not just for our school, it’s for Greytown itself. If you can’t cycle in Greytown where can you cycle?”

Preston said that when completed the track will loop around the school grounds and feature a pump and skills track.

“It won’t just be a circle round the field it’ll be something that’ll really challenge the kids.”

After speaking at the dinner Sarah Walker returned to the school on Sunday morning to sign autographs for the pupils.

“It’s been really cool to see the turnout here today and get the feedback from the kids,” she said. “It’s very obvious that Greytown is a tight-knit community and everyone wants to be involved.”

Walker said she’d done her best to pass on a few biking tips to the pupils.

“When we first do something, we’re horrible – the first time I rode BMX I wasn’t a world champion but the more I practised the better I got at it.”

The silver medallist said she’d be keen to try out the track when it was built.

“It’d be cool to see the project finished. I’ll keep an eye out and maybe once they’ve finished I can come down and have a ride.”

While the school will look to raise from $15,000 to $20,000 more, principal Patrice O’Connor said construction would start by the end of the year.

“After the fundraising night we had a whole heap of offers from the Greytown community,” O’Connor said. “One farmer has donated us a shipping container to store the bikes in, and a local construction company has offered to do the work.”

O’Connor said that some pupils could hardly believe the track was going to be built.

“One of the kids asked me this morning: ‘Are we really going to build the bike track?’, and I said, ‘yeah of course we will’.

“He replied that he’d thought it was all a dream, and I was able to say back to him, ‘Well, dreams do come true’.”