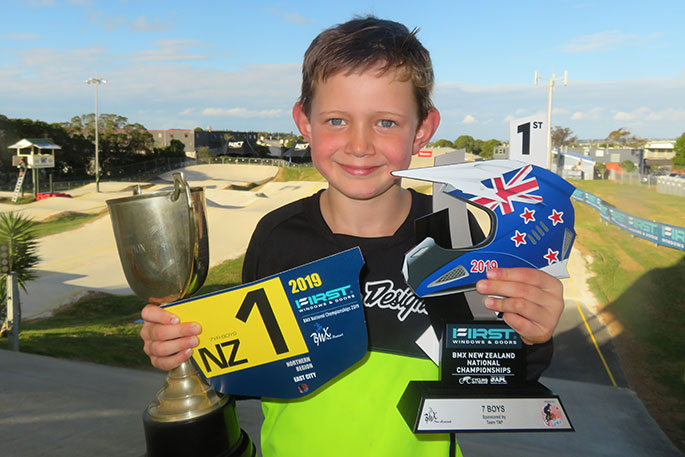 He is only six years old, but Coast BMX champion Dylan Szaszy is heading to the UCI BMX World Championships in Belgium in July.

Dylan, who is in year two at Whangaparāoa School, qualified for the World Champs after coming first in the New Zealand BMX Championships seven-year-old division last month.

He won five out of his six races and achieved a personal best time, which was fast enough to qualify for the finals in the division above him.

The World Championships is an all-ages event that is held over two weeks in a different location every year. It attracts some of the biggest names in BMX including Kiwi  Sarah Walker and Dylan’s favourite, Michael Bias.

Mum Nicky Bonsall and Dad Andre Szaszy say that despite only having three months to organise the trip, and its high cost, it was an opportunity they couldn’t pass up.

“Dylan lives and breathes BMX,” Nicky says. “We never wanted to put pressure on him to do BMX for the sake of competing, but he gets so excited every time he gets to race. He just does it because he loves it, which has led to him doing really well.”

As well as biking to school every day and during every lunchtime, Dylan also rides with the North Harbour BMX Club three or four days a week.

He remains undeterred even after a nasty injury last year, which left him with seven stitches in his chin and two missing teeth.

“He wasn’t allowed to bike to school for a while after that, but it was still all he wanted to do even the after it happened,” Nicky says. “It was hard to stop him!”

While Dylan doesn’t quite know where Belgium is, he says it is pretty cool that he gets to go on a plane for 24 hours. His Mum and Gran will be accompanying him.