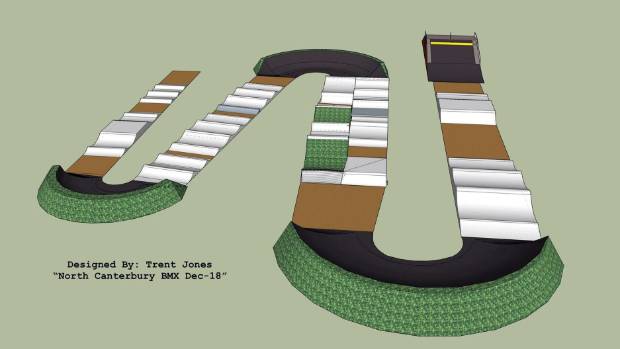 Members of the North Canterbury BMX Club are excited about their future amidst plans to build a new Nationals standard track on the current site.

The new track will be designed and built by Rio BMX Olympian Trent Jones, and club president Aaron Clark said the work was due to be completed by Christmas this year.

Since the current track was constructed in 2002 its design had become obsolete, Clark said, and was no longer up to the standard required to host large events such as the Nationals.

“It’s been a downward spiral for the club,” he said. “We need those bigger events to keep the club moving forward. We were turned down for the Nationals in 2020 because of the track but we have secured the 2021 South Island champs with our plans for the new track.”

Clark said the four-day event would attract riders from all over New Zealand as well as from Australia. He expected 400 riders and their families to attend.

“It’s good for the club and for the whole of Rangiora with so many people coming in to the area,” he said.

Jones, who has built tracks in New Zealand and the USA, was a real coup for the project, and BMZ NZ would also be involved. Clark said the track would be the premier track in Canterbury.

The Waimakariri District Council had also been incredibly supportive of the project, giving the club an extra bit of land with which to expand the track, Clark said.

“We’ve also been talking to funding organisations about grants for the rest of the money. So far we have got $40,000 and we need about $90,000 so we are pretty confident.”

Clark said he was keen to hear from any businesses keen to be involved by way of sponsorship.

“We are happy to put signage up around the track or on the starting gate, which is one of the most photographed parts of the track.”

Thousands of riders used the track each year and the new design would be a great asset for the whole community, he said.