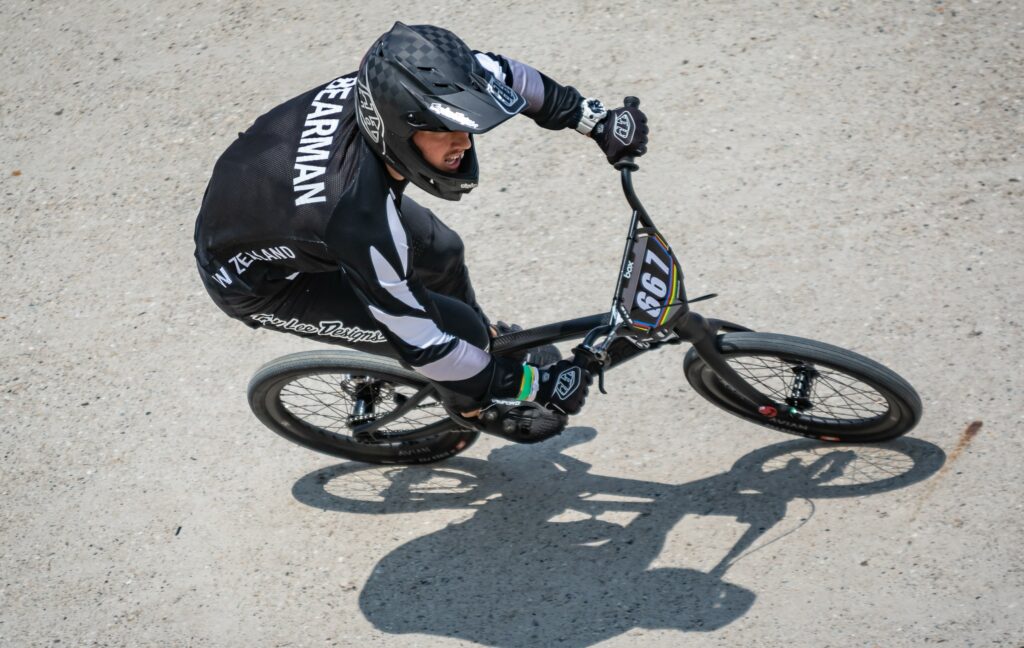 North Harbour rider Rico Bearman saw a world title slide from his grasp after he crashed while leading in the junior elite men’s final at the UCI BMX World Championship in the Netherlands.

Bearman, 18, had been the dominant rider in the junior elite class, topping his qualifying group, winning his quarterfinal and easing down to be a close second in his semifinal.

The five-time age-group world champion got the jump out of the gate and led into the first corner as the two leaders stretched away from the rest. The young kiwi pushed further clear over the jump on the second straight but his wheel slid out on the corner – and his race was done.

“I surprised myself a little bit with how good my first straight was,” said Bearman. “The second jump over the berm is super-wide and I was worried that the riders behind would bomb me and I had no clue where anyone was. So, I turned my front wheel as it landed but I guess my rear wheel was still in the air.

“I slid out and ended up facing the riders behind and they were still way back landing at the other jump and I just couldn’t believe it.”

Earlier junior elite teammate Bennett Greenough from Cambridge suffered a flat tyre that ended his hopes in the quarterfinal after he also won his qualifying moto group, while elite rider Michael Bias (North Harbour) just missed out on the elimination round by two points.

Both elite juniors, Bearman and Greenough impressed in the opening three-moto qualifying rounds. Bearman had two wins and a second placing to top his moto group and established the fastest time of all juniors of 35.800 for his circuit, the only junior elite rider under the 36 second barrier.

Bearman grabbed the hole-shot, proceeding to dominate his quarterfinal winning in 3.831, the only rider under 37 seconds in the quarters. The North Harbour BMX Club rider made the jump from the start and led throughout his semifinal, just sitting down at the end to be pipped by 0.02s for top qualifier for the final.

Bennett also topped his group with a win and two second placings in some consistently strong rides, and among the fastest 10 riders overall.

While he jumped out of the gate superbly, his tyre had flatted on landing, which meant he slid wide on the first corner to be swamped by riders inside him and from that point his race was done. It was a disappointing end for the young Cambridge rider who had ridden so impressively to that point.

The times for both Bennett and Bearman out of the start and for the full lap were in the top 20 of all riders, junior and elite, to give a glimpse of their prospects for the future.

“I am super proud of the boys. Coming into this event I knew both the junior boys were firing,” said Matt Cameron, the National BMX Performance Hub Coach.

“Judging by their training data tracking and having spent some good time overseas racing and learning leading in to the championships was very positive. Everything was showing that they were both able and ready to put it on the podium.

“It was unfortunate for Bennett to have a flat tyre and for Rico to go down in front in the final. These setbacks happen but I am sure the boys will take the positives from this experience.

“The next step will be to get these guys home safely into MIQ and then when ready, move forward into the next planning stage.”

Meanwhile Bias had gone into the championships with a health issue but was cleared by the event medical staff although it had affected his preparations.

He was solid in his first moto, but missed the start in the second to end up sixth. While he saved an excellent run to be fourth in his final moto, he missed out by two points overall to get through to the elimination rounds.

Bearman said he would take the positives from his experiences for the future.

“We only did one race since covid which was the nationals and I did my preparation in USA where I made my pro debut in Utah where I got fourth which was a good confidence booster.

“I had no idea how quick I was to the rest of the world, so I surprised myself with my speed down the first straight and around the track. The hard work with my coach Kurt Pickard almost paid off, but overall I was super-happy with my gates and first straight. That was a good positive.

“Next year I am an elite and I think I can keep up with the big boys. Paris is definitely the main goal. I will sit down with my coach and set a plan for the next three years to qualify New Zealand a spot for the Olympics.”