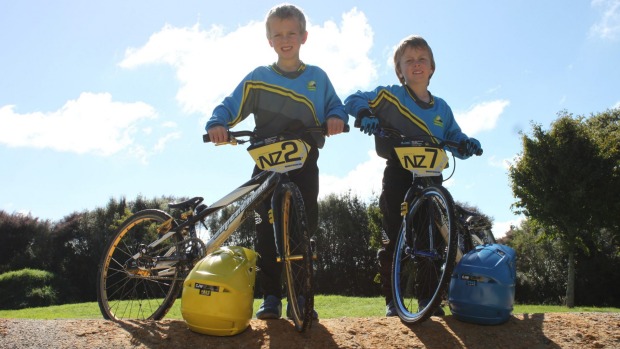 Caleb and Jacob White are brothers with big ambitions.

The five and seven year olds are making a big impression in the national BMX scene and have goals to represent New Zealand at the Olympics one day.

They are already well on their way.

They are members of the Tauranga BMX Club.

Caleb, at age five, he was on the hunt for a sport.

The family was driving past the BMX track on Burwood Rd and he decided then and there, that was the sport for him.

Only issue was, he couldn’t ride a bike without trainers.

Two weeks later that problem was solved and one month later, he was raced in his first BMX club competition.

Three months later he placed second for five-year-old riders and under for the northern region, in the winter series.

“I thought it was awesome,” says his father Craig White.

“His club coach thought Caleb had a lot of potential.”

From there he placed sixth in his age group in the North Island titles in Taupo, in his first official big race meet.

The Oceania champs was next, where he placed fifth and then placed fourth in each of the nationals, North Island and South Island titles.

But the BMXNZ was his personal best.

Caleb had talked through his goals with his parents, and placing in the top three was one of them.

“Now I am aiming to be number one,” he said.

Jacob is not too far behind his older brother.

In 2016 he placed fifth in the nationals and fourth in the North Island titles.

This year he reached his personal best in the South Island titles, placing second.

The boys like that they share the same sport, and competing in different age groups, gives them each a personal sense of achievement.

“But Jacob doesn’t cause I always beat him.

“Daddy makes it fair and gives Jacob a head start.”

There are plenty of people to look up and learn from in the New Zealand BMX scene.

The brothers both admire BMX Olympians Trent Jones and Sarah Walker, both whom they have met.

Kurt Pickard, the first BMX NZ Olympian, from the London 2012 Olympic Games, is their club coach.

They boys aren’t the only ones learning.

The BMX circuit has opened up a whole new world for parents Nicola and Craig.

They feel an incredible sense of community and support through the Tauranga club.

“The senior boys spend time with the young kids, mentoring and looking after them. I think that’s quite rare,” said Nicola.