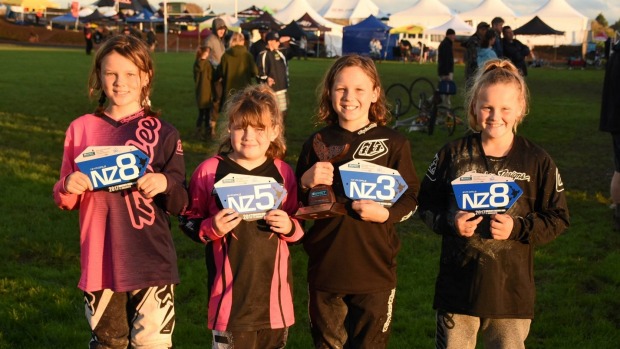 Paeroa members competed against riders from around the country in wet and muddy conditions following the tail of Cyclone Cook.

Taylin had held onto third position for most of the champs. After a nasty crash which took a chunk out of her helmet lid and bent her handlebars, Taylin’s mum Michelle said it would have been okay if she wanted to finish but Taylin dusted herself off and carried on.

“To get back on her bike and keep going was a massive feat in itself,” Michelle said.

Confidence was the number one thing Taylin said she gained from the experience.

“At the start I was nervous but then it was okay,” she said.

“We would ride our bikes all day long if we could.”

Jaylar was the only girl competing in the five and under category, but her mum Alana said it didn’t faze her at all.

“She just did her thing, and held her own,” Alana said.

Getting to meet one of New Zealand’s first Olympic BMX competitors and silver medallist Sarah Walker, was a highlight for the riders.

The Paeroa BMX Club holds club nights every Tuesday during daylight savings. The club is currently fundraising for a new ramp and safety start gate for its Taylor Ave track.