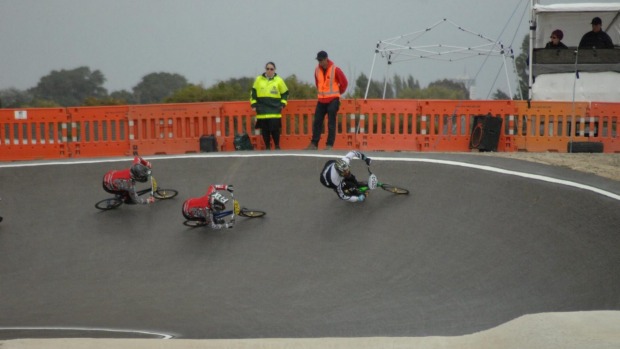 North Canterbury BMX Club rider Ella Hansen, who competed in Australia the weekend before, said she felt confident of her chances in the lead up to the event and was proven correct, taking first place in the 15-16 Girls division.

Although North Canterbury made up a small number of riders on the day, club member Nic Daniels also performed well, taking second place in the 15-16 Boys division.

The hosts had the most riders on the track on the day and managed to get many of them into the top eight of their divisions.

Varty also narrowly beat out North Avon’s Bowers-Wilson the top spot in the Suck It Up Male Superclass 15+.

“It was an excellent event, the feedback from BMX New Zealand and the competitors was full of praise.”

Mahan said the club’s 18 month old track was touted as “one of the best” by riders and was up there with the best in the country.

The track’s surface had meant the expected crashes and broken bones had been kept to a minimum over the weekend with only three such incidents over the two days.

“I think it’s a testament to its quality that the ambulance workers were only a quarter of how busy they normally are.”

Mahan said the North Island riders were strong competitors and that it was good for southern riders to go up against them and increase their own skills.

“I did say in my farewell speech that they took too many of our trophies, so we’ll have to go there and take them back.”

Mahon was pleased with how the North Avon club performed over the weekend, saying it boded well for the club’s future along with their high membership.