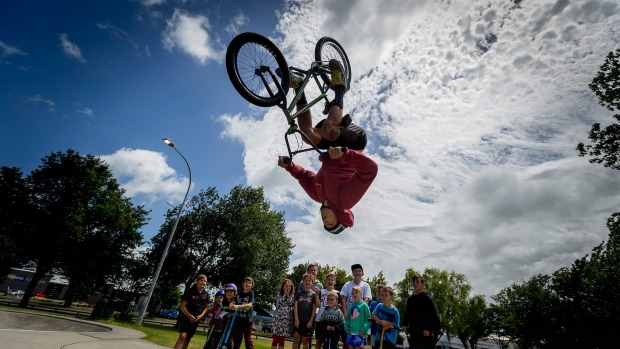 A BMX and Nitro Circus star who performed the world’s first quadruple backflip has no trouble keeping grounded.

Jed Mildon is travelling across New Zealand to promote Nitro Circus and his enthusiasm is not diminished.

Barely batting an eye, Mildon performs a backflip in front a group of watching children at the Church St skate park in Palmerston North.

The crowd is left dumbfounded.

Caleb Aldridge, 13, said he never seen anything like that before in real life – “only on TV”.

That reaction is why he still does what he does, Mildon, of Taupo, said.

“I love what I do. Everyone in the circus loves what they do.

“We are here to entertain people. That is why we are still here – to make people happy.

“We get rewarded every day with people’s happiness, which is a privilege.”

“You need to get a lot wiser.

Mildon said there were people in Nitro Circus in their 40s and he was not ready to give up his spot to any young guns.

How could you not go big in a place like this? Jed Mildon

But going back to skate parks did bring back memories of younger days.

“You remember when you were young and how it was to meet someone in my position. It was a special feeling.”

“It is just a lot bigger ramps now.”

Mildon takes time for his young fans, signing everything put in front of him from shirts, to helmets and even scooters.