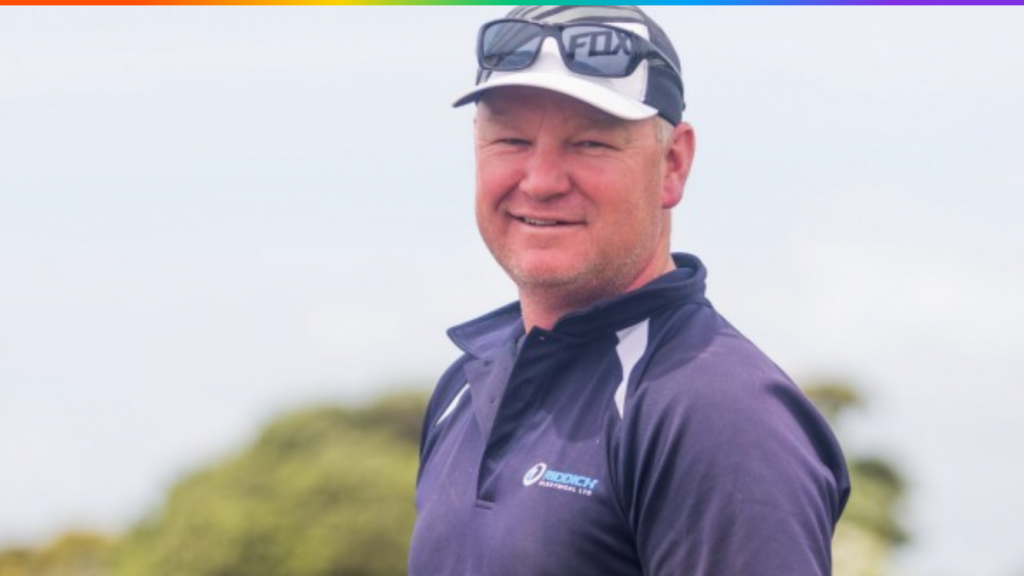 Blair Riddick won’t say how many hours he spent working on getting New Plymouth a new BMX track.

But it would be a “horrendous” number. Riddick, 40, who is self employed, started keeping a diary for the first three months, but decided it was better not to know.

“Projects like this need one idiot to grab the bull by the horns, but you do need a team to grab the bull by the leg and help you with it,” he says. “Even though people are saying this wouldn’t have happened without me driving it, I did have a bloody good team around me – Nigel Dixon, Neil Crowley, Carolyn Jackson and my wife Melissa.

“Unfortunately my wife and kids missed out on a lot. Without their support it wouldn’t have happened.”

It all started in 2006 when the New Plymouth BMX Club was told by BMX New Zealand that its track at Marfell Park wasn’t up to scratch, he says.

“I came up with the idea we should shift next to the velodrome [in Bell Block]. The softball diamond was here at the time and it was a bit of a standing joke with everyone that they wouldn’t move. So I said I’m going to go and ask them to move. Everybody laughed at me, but the softballers were quite receptive.”

With the location sorted he started corresponding with the council about funding for the project, he says.

“We had to raise $600,000 before we could turn dirt. Lots of tears, lots of sweat. Lots and lots of meetings. None of the funders wanted to know us until we got something out of the council.”

Once the council came to the party funders and sponsors followed. They decided to get the track built by an American company which had built the last three Olympic tracks and most of the BMX super tracks around the world, he says.

“Nigel Dixon and I decided right from the start that if we were going to commit ourselves to it it had to be done properly or not at all. We formed the Taranaki BMX Trust.”

“I put a lot of that together with Venture Taranaki. That’s awesome. In the country that’s your top tier event. One of our lines to the council was ‘provide the facility and they will come’. And here is the living proof – if you provide facilities big events will come.”

And so will the riders – membership has gone up by more than 20 members in the last six months.

It is not enough to just have a vision, he says.

“You have to be driven enough to follow it through.”

What drove him was the children. They rode their hearts out at the big competitions, but their home track was missing a big start ramp, the tarmac corners and the long rhythm straights, he says.

“They are three crucial factors to kids doing well. I recognised it wouldn’t benefit my kids too much because by the time this facility came along they would be too old to benefit from it. They’re 14 and 11. It’s for the 7, 8, 9-year-olds benefit. They’re going to start on a high class facility.”

He gets a lot of satisfaction out of the fact the kids’ skills are going through the roof, he says.

There’s an awful lot of satisfaction in that, he says, laughing.

Blair Riddick is the third of five nominees for the 2016 Taranaki Daily News Person of the Year award. Helen Harvey has interviewed each of the finalists. The winner will be announced on Saturday.