For the third time in 16 years the Continentals arrived in New Zealand and it had been a long time coming. It started back in late 2014 where the discussions kicked off with the hope to host the 2016 Continentals, which has sat with Australia for so long. After some months of negotiations the allocation was presented to BMXNZ. 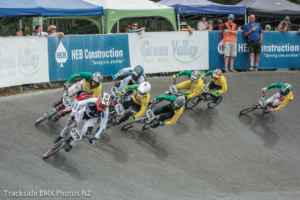 Fast forward to January 2016 & the weekend of BMX started to heat up with the Auckland Champs & the Championship Nationals.

This splitting of the Championship class was to assist the Elite Class rider get their titles & points before heading overseas to trail & race in the World Cup Supercross series. It’s always great seeing rider pin down the 8m ramp & the corner jump never ceases to offer entertainment.

Into the main event on Sunday, the big guns were out, with a the full Aussie HP team &the full Kiwi HP team, plus all the privateer championship riders, the competition was to be fierce. Plus on the Challenge Class side, a few Aussies had come to try & get Oceania titles along with all the kiwis.

The day started wonderful with beautifully blue skies, sunshine & a fantastic track surface to race on, nothing to hint at what was in store…

The Junior women had the numbers to have a separated race from the Elites, which is great to see in New Zealand, but it was the Aussie Saya Sakakibara that stamped her authority on the racing. Our Rebecca Petch kept her honest with one win & two seconds, but Saya took away the title for 2016. In the Men’s there were almost even numbers of rider from Aussie & NZ and the racing was full on, during the motos the Aussies seemed to have their head in front of the kiwis, with mixed placings through motos. The points evened out for the finals with 4 riders each and it was a doozy race.

Maynard used every millimeter of his home track knowledge to push out front & never looked back, with three Aussies following Maynard & then our kiwis to follow in for 5th/6th/7th.

With one of the biggest fields we have seen in NZ for a while, the 21 riders all had a good chance in this event, but the infamous corner jump was the key to the track & the first corner the play maker leading into it. There were some impressive skills on show, but one that stood out was the pickup manuals of Matt Juster over the first jump was something that impressed a heap of people.

Leading out of the motos was the likable Bodi #747 Turner, follow by NZ speedster Trent Jones & SX superstar Sam Willoughby, who all pushed through the semis well, to star in the final. As we all know BMX finals can put up many outcomes & this was not to be any different.

Trent & Bodi sprung out of the gate into the first corner ahead of the bunch, Bodi seemed in front initially down the second straight but some low & quick jumping by Trent put him ahead, but in the effort to keep up with Trent, Bodi made a huge error on the corner jump & went down hard. The race finished with Trent out front, with three Aussies following just like the Junior Mens final, the rest of the kiwis filling spaces & young Bodi stretchered off. So a stellar rider by Trent nabbed the big title which backed up the Nationals title a day earlier.

In the Women’s field, two of the fastest riders in the world squared off. A points over event for these guys, every position counted. Sarah with a 3rd in the first moto, Caroline 1st & Lauren 2nd, Sarah really needed to make it happen in the next two… 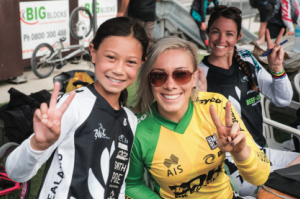 Moto two saw the three riders trade positions, so balancing the points and it was all on for the last moto. The gate dropped & Caroline had the first straight, but Sarah seemed to have the skills & pulled it back for an exciting photo finish, with Sarah just ahead by a tire width… Like Trent, Sarah took home the big title, along with her National title the day before, for a double win!!

The challenge classes are not a feature in the Australian Oceania’s, so it was all on the line for 2016. A few Aussies came to race, but it was mostly kiwis in the hot seats.

As with any NZ event the racing was hotly contested, with the motos done and the semis completed in the usual deadman style. Then Mother Nature wanted to play… and in the break prior to finals the skies darkened & the deluge started… typical Auckland weather. There were some hard decision to make, discussions were had and eyes were continually on the clouds. In t he end, the finals started & on the racing went.

A big congrats goes to the SC crew keeping the track surface as good as it was during some of the heaviest rain we have seen in Auckland before. The show continued and all finals completed. Prize giving was held, as the sky lightened & people got to head home in the sunshine again… What a day.
All in all, a fantastic event, one that we hope to bring back to NZ sometime in the next few years, and we hope to have a whole heap of Aussies head over to make it truly continental.

It will be great to see the ‘O’ plates being ridden around NZ for the next year and we hope you all enjoyed the event too.