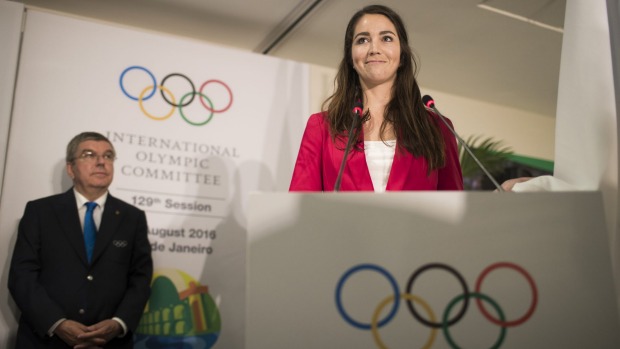 From the gallery, Olympic BMX silver medallist Sarah Walker watched on, as the document she had spent 12 months creating was raised in front of international sports’ most prominent figures.

It was a moment that lasted no more than two minutes, but it’s set to serve as a lifetime promise to protect the rights of athletes worldwide.

So far, a binding document to hold countries accountable for those basic athletic rights doesn’t yet exist.

But overnight (NZ time), the first official step to change that was taken, when ‘The Athletes’ Declaration’ was addressed at the inaugural Olympism in Action Forum.

It felt like “race day”, with nerves and excitement, Walker said.

“Knowing you’ve worked and prepared as much as you can to deliver the best you have… it meant I could be proud.”

It marked a significant moment at the Buenos Aires conference, which was created for this very purpose – to raise issues affecting athletes in the Olympic movement.

And it was a moment that capped more than a year of exhausting voluntary work for Walker, who chairs the Athletes’ Declaration Steering Committee that collated the wishes and issues of more than 4000 elite athletes.

As a global exercise, they found some athletes lacked a clean sporting environment, others wanted more protection for their mental and physical health, and some simply wished to practice sport without discrimination.

Walker admitted the biggest impact was hearing their stories.

“It’s hard to hear about athletes who are going through different issues, because they are given no option but to deal with it, unless they give up the sport,” Walker said.

“Athletes are staying in those conditions, so they can continue doing what they love.”

The document is also timely for New Zealand, with many major sporting bodies undergoing or recently completing reviews to address similar issues.

If the declaration is accepted by International Federations and National Olympic Committee’s at an IOC meeting on Monday night (NZT), it will hold 206 countries in the Olympic Charter accountable for the welfare and basic rights of their athletes.

That mission has seen Walker spend hours talking to athletes and learning the intricacies of the law, all while juggling her own BMX career and fighting for her spot at the 2020 Tokyo Olympics.

But it will all be worth it, if the document is adopted and protecting every athlete at those 2020 Games.