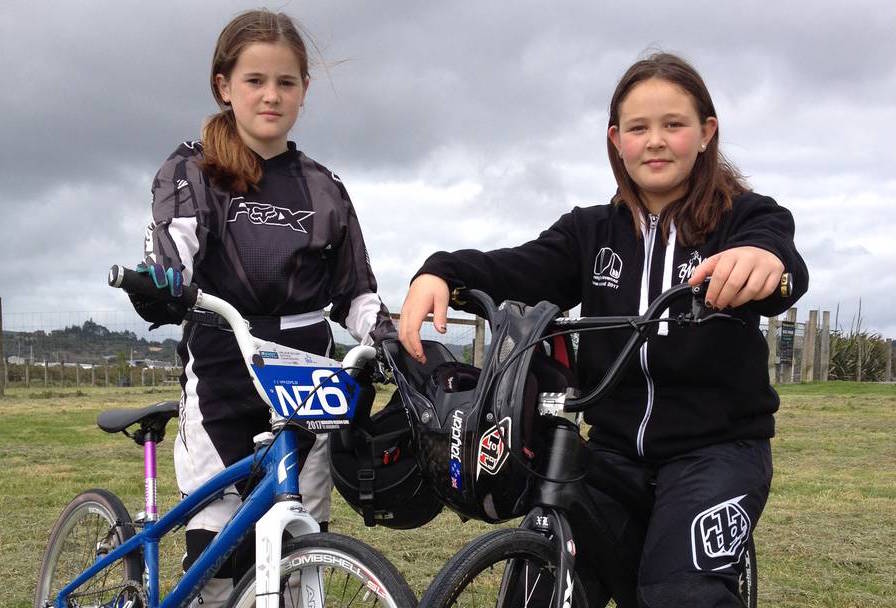 Two 11-year-olds are proving BMX is in their blood, being the first second-generation riders to have made this year’s Mighty 11s Junior test team.

Whakatane’s Jaydah-Lily Lees and Tauranga’s Kiera Waite trialled for the team in Whangarei last month, with Lees confirmed as the first second-generation team member since its inception.

Kiera originally secured a reserve spot but an injury suffered by another rider meant she will get to race with the team in this weekend’s BMX New Zealand North Island Titles in Whangarei, becoming the second, second-generation Mighty 11s team member.

The prestigious Mighty 11s team, consisting of the country’s top riders in their age group, will be taking on their Australian counterparts.

Both Jaydah-Lily and Kiera were thrilled to be part of it, particularly because both of their fathers had been part of the same team more than two decades before.

“I’m excited because I get to represent New Zealand,” Jaydah-Lily said.

Jaydah-Lily’s father Hayden Moore was selected as a Mighty 11s member 25 years ago remaining in the squad for two years and Kiera’s dad Cameron Waite raced with the team the following year – with both riders scooping wins.

Jaydah-Lily said there were many reasons she enjoyed BMX racing, including meeting new friends, travelling around New Zealand and abroad, as well as racing in general.

The best part however, was getting on top of that podium at the end of a race, which she hoped she could do at the end of this racing weekend.

Both girls were confident they could secure a top placing.

“I’m hoping to get the trophy back,” Jaydah-Lily said.

“We’ve got very fast people in our team,” Kiera said.

Since the trials both Jaydah-Lily and Kiera have attended team trainings in Cambridge and club nights in Tauranga to prepare for this weekend’s event.

Kiera, who started in BMX about three years ago, said she loved training because “you learn new things, you get faster and improve”.

Jaydah-Lily, who has been riding since 2013 and understands the importance of having goals, hopes to continue to grow in her sport, “to do my best and maybe go to the Olympics”.

Jaydah-Lily and Kiera’s dads were obviously proud of their girls.

Moore said Jaydah-Lily has been eyeing a place on the team for some time and was proud when that goal was reached.

“She’s been looking forward to it for a couple of years now,” Moore said.

Waite said both he and Kiera had “mixed emotions” about the selection but they could not wait.

“She was scared and excited and sad for the other girl,” Waite said.

If you ask the dads who would win a race between them and their daughters though, Waite reckons he would be a bit slower than Kiera at the moment and Moore believes his own fitness may let him down.

Tauranga BMX Club president Tina Bourke wished both of the girls luck and hoped they could win the cup like their dads did.

She said making the Mighty 11s was a testament to the efforts the riders and their families had invested. She hoped to see both of their dads get back into racing themselves.

“It’s about time the dads get back on their bikes,” Bourke said.