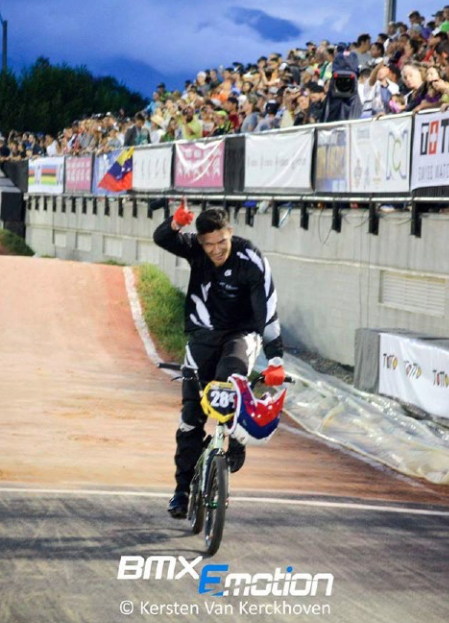 https://www.facebook.com/noble.tm/videos/10210837446846378/
It was again a show of dominance from rising Kiwi athlete Peel. Yesterday the young star declared that he would like to claim a clean sweep across the weekend, and now with two wins for the weekend all that remains on his shopping list is tomorrow’s BMX Australian Grands Assault National Series.

Due to trouble during practice, Maynard’s bike was unrideable, but thanks to fellow Kiwi’s, Cailen Calkin and Cole McOnie lending their bikes, he was able to compete and take out the title.

It was a day of double joy for Sakakibara, as younger sister Saya also won to claim her second straight junior elite women’s Oceania title.

The win is also the first for Curtis in 2017, the victory coming at an opportune time with April’s Australian national championships on the horizon. Despite claiming top spot, Curtis said that she is still struggling with her starts.

“It was good to finally get that win out of the way, I am really hurting now,” Curtis gasped.

“I had a pretty ordinary start, but luckily I feel very confident on this track and I was able to come through. With my starts I am still struggling to get my body and legs throwing forward at the same time. Once that happens I will be back on top of them, so I will work on it again tomorrow.

“Today we started off the eight metre hill, which suits me a little better. The girls I am racing have a bit more power than me down the flat, but the bigger start hill is a bit more about confidence and skills and that was my advantage.”

While Sakakibara might be dreaming of representing Australia at the Olympic Games alongside his younger sister, Saya Sakaibara was busy putting together yet another victory at the Bathurst track, telling of her increased confidence with every lap she leads.

“It’s really good to be in the lead, it always brings my confidence up and it helps me prove to myself that I can win,” she said.

However the day wasn’t just about the elites, with riders as young as five-years-old taking a slice of the action in Bathurst to the rapturous applause of the crowd. The event is an important stepping-stone in their development as the future stars of the sport.

Like Tucker, Kiwi rider Karepa Heke Kaiawha enjoyed two wins, coming in the 13-boy’s and 13-14 boy’s cruiser classes. Compatriot Megan Williams won the 13-years girl’s title. The joy continued for New Zealand when Bennet Greenough won the 14-boys event, but the Aussies struck back with a win for Shannon Petre in the corresponding girls event.

Nathan Seal was the man of the moment on the 17-24 men, while flying Kiwi Toni James won the 25 and over women’s race as well as the 17-29 women’s cruiser race.

The final day of action at Bathurst BMX track will continue at 9.45am EDT tomorrow with the BMX Australia Grands Assault National Series.

You can view today’s full results by CLICKING HERE.