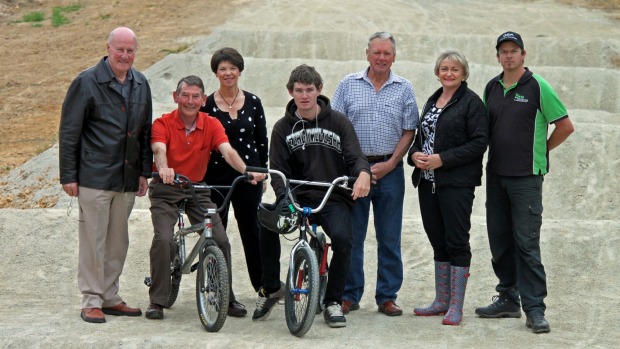 The finishing touches to the Matamata BMX track could be finished by Christmas, all it needs is a project manager to see the initiative to completion.

SportWaikato recently held a public meeting to discuss what’s next for the track.

SportWaikato area co-ordinator Lou Beer says those at the meeting agreed the track needed a project manager to see its completion to the end.

It was the second public meeting about the track, following one in 2014, to gage support from the community.

Since that meeting, Beer says Ziggy Burch, Denham Russell, Ross Taylor and Nik Schuler have worked tirelessly to create the track, but the men can no longer put in the hours.

“They turned up week after week for hours and hours to get it to where it is. Now their lives have taken over.”

Beer says she is also grateful to Bruce Maxwell, who attends to the track weekly and keeps the area tidy.

She says Ross and Denham attended both meetings, and there were also a few younger boys who use it regularly, willing to pitch in where needed.

“That has always been a highlight of working with this group, we have had youth working for youth, which is fantastic.

“But of course they can’t lead it. They can be led and are willing to be led.”

The track was designed by Tauranga based BMX track designer Will Peck. It still needs concrete or asphalt on the start ramp, which has deep ruts from water damage, the installation of starter gates, lime and hardener and minor work on some of the straights and jumps.

Beer says there are plenty of people willing to be involved and the funding from council to help it reach completion but no one to call the shots.

“We know we have the people willing to turn up to the working bees and see the track finished, but we don’t have a leader.”

She says the project manager would be responsible for getting quotes, working with council and arranging working bees. If someone came forward, the track could be finished by Christmas.

“It’s a short term project. Let’s do this as a Christmas project for Matamata and have it safe to use over the holidays. I want to see it finished.”

Beer says they would also like the project manager to look into the possibility of a toilet and a tap connected to the water supply.