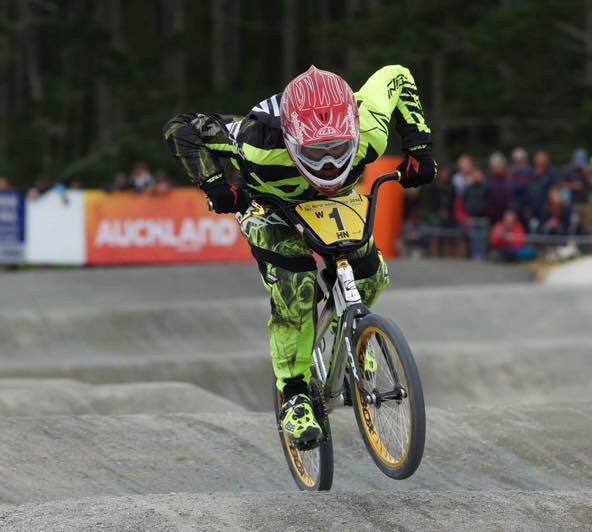 Waikato riders were again to the fore as New Zealand gained more glory on the second day of the UCI BMX World Championships in Colombia.

Fifteen-year-old Cailen Calkin produced a superb ride to take the world title in his age group on the second day of Challenge class racing at Medellin.

The Hamilton rider was joined in the medals by Cooper Merito from Te Awamutu who won a bronze medal in the 13 years boys competition.

It brought the overall tally to six medals including three world titles after the Challenge class racing, with further age group racing tomorrow in the Cruiser class, for the wider 24” diameter wheeled bikes.

Overnight rain forced a delay to racing today as the track was repaired, with the finals completed as light started to fade.

Calkin impressed with dominant performances in the motos, reduced to just two rides with the constricted programme. He also won the eighth final but only just scraped through to the quarter and semifinals, finishing in the last qualifying slot in fourth and third places respectively.

However the young Waikato rider nailed his gate in the final to win impressively, to help make up for last year’s disappointment when his chances were thwarted after two riders crashed in front of him.

Merito was in stunning form, winning both his qualifying motos, and the elimination rounds including the semifinal. He had to settle for third place in a tightly fought final.

Four other New Zealand riders made finals today with the Hamilton pair of Baylee Luttrell and last year’s world champion Jessie Smith fourth and fifth respectively in the 15 years girls; Pukekohe’s Holly Woodcock-Takarua (Sunset Coast) was fifth in the girls 17 years and over and Hamilton’s Jason Kelly was fifth in the Masters final.

The Cruiser class races will be staged tomorrow followed by the first practice for elites, with qualifying and time trials for the elite on Sunday (NZ time) and elimination races through to the final on Monday.

The elimination stages from quarterfinals onwards will be broadcast live on Sky Sport from 8am on Monday (NZ time).