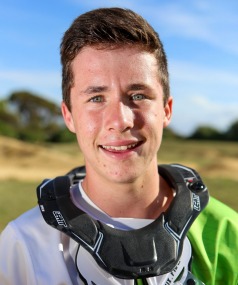 The eight bones he broke last year have healed, but BMX rider Logan Clarke admits his confidence isn’t quite there just yet.

The Nelson College student is set to compete in the boys 15 race at the New Zealand BMX championships in Pukekohe this weekend, the same event he crashed at last year, breaking eight bones in his arms after another rider clipped him heading into a jump.

It took around three months and four operations for Clarke to get back on his bike, his arms being so weak that he couldn’t even open a car door when he finally got out of his casts.

While the 14-year-old is now fit and raring to go, Clarke said the biggest battle remains in his head.

“I feel pretty quick but I guess it comes down to who I have to race and if my mind does back out. I had North Islands recently and I was fast enough by myself but with other people around me my head-space wasn’t right. I kept backing out because I was scared of other people next to me,” he said.

“I think I’ve got better since that and I try to block it out, but whenever people get close to me I seem to slow down and put on the brakes, and then they get in front.”

Clarke’s toughest challenge is expected to come from former age-grade world champion Cailen Calkin. Getting the 2NZ number back on his handlebars is the aim, but he said a successful weekend would just be making the final again.

“I guess it’s a good achievement just to make the final after coming back from broken arms.”

He also spoke of his sadness after the recent death of slopestyle superstar Kelly McGarry, who grew up riding at the Nelson BMX Club’s track in Tahunanui and even raced Clarke during a visit last year.

“He did inspire me but I think I’ll stay with BMX rather than the free-ride side of it. It was hard for me and hard for all of the mountainbike people as well. I think the Nelson community and the world community was affected by it.”

Clarke wanted to thank his sponsors LKI and DK Bikes who, along with his grandparents, have helped him get back to the national championships.

Nelson BMX Club has an eye to the future