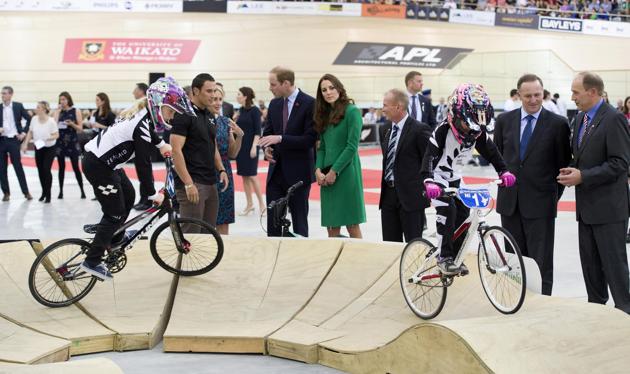 Opening of the National Cycling Centre

The Duke and Duchess of Cambridge officially opened the National Cycling Centre on Saturday, receiving loud cheers from the 2000-strong crowd as they walked down the red carpet.

The Duke and Duchess of Cambridge officially opened the National Cycling Centre on Saturday, receiving loud cheers from the 2000-strong crowd as they walked down the red carpet.

And though baby George wasn’t there, he didn’t go home empty handed.

Mr Struthers said the prince will have to wait until he’s two years old to give the bespoke balance bike a spin.

The crowd let out an audible sigh when Kate unwrapped a second present – a black and white lycra Avanti cycling shirt.

The world champs took home the race and a sweaty Dawkins said afterwards he got a huge “buzz” from racing in front of the royal couple, while Webster said winning with royals watching was “a pretty special thing”.

Kate and William were then shown around the centre by Olympic gold medallist Sarah Ulmer and royal tour regular Prime Minister John Key.

Drysdale, who had met William in 2011, said it was great to meet the royal couple.

“They are personal and very easy to talk to and I think that’s why you’ve had the crowds around the country.”

Current BMX world champion 12-year-old Cailen Calkin whizzed around a mini wooden BMX track in front of the royals – and was pretty taken with his famous audience.

“That was the most incredible thing ever.”

Other guests – including singer Bic Runga – were at the opening where pop songs from Rihanna and Coldplay were pumped over the sound system.