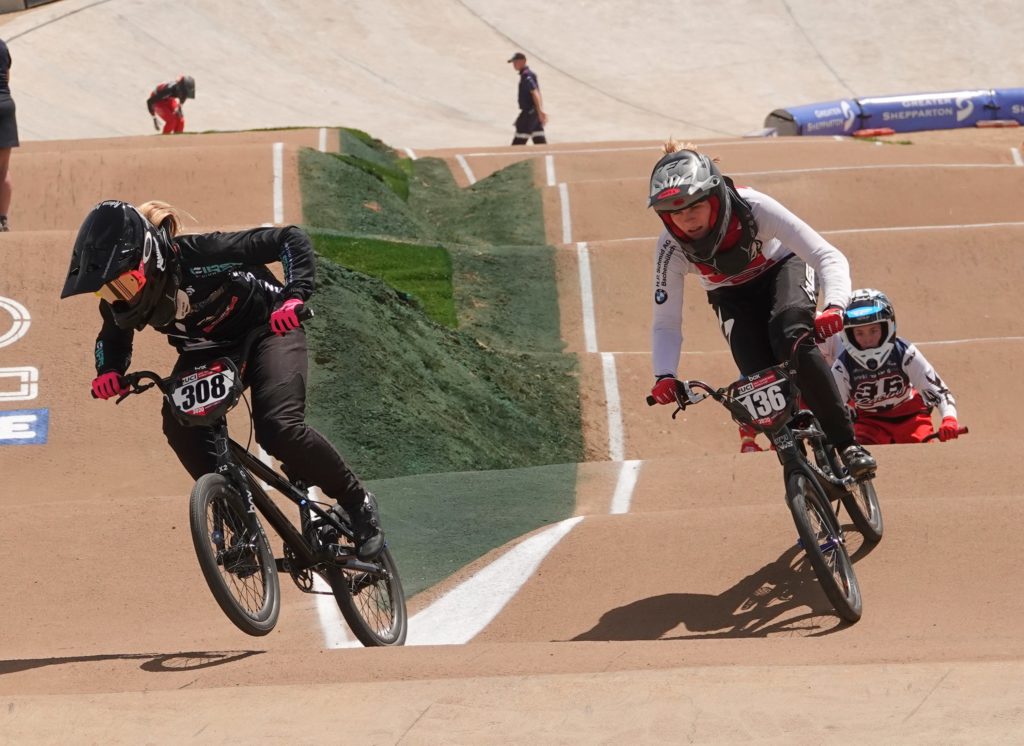 New Zealand’s quest for qualify two female BMX Racing riders for the Tokyo Olympics has started on an encouraging note in the opening rounds of the UCI Supercross World Cup in Victoria, Australia.

Their points will help close the gap from their current position of seventh on the Olympic rankings with the third to fifth ranked nations securing qualification for two riders for Tokyo, with sixth to 11th ranked countries getting one spot each. There are five double-header world cup competitions and the world championships scheduled before the 1 June cut-off.

Petch, New Zealand’s top ranked rider at 21 in the world, made it through to the semifinals in the opening round, finishing sixth in the semifinal, just 0.8sec off making the final. She was strong on the second day also, second in qualifying, winning her first round and second in the quarterfinal. However she got squeezed from a wide gate on the big first jump which cost any chance in the semifinal.

Walker, who went out in the quarterfinals on the first day, was strong throughout day two, second in qualifying, third in the eighth-round and fourth in the quarterfinals. She appeared to pull a pedal out of the gate in the semifinal, recovering but not progressing to the final.

It proved a successful weekend for American world champion, Alise Willougby who won the final on both days.

North Harbour’s Michael Bias also enjoyed an outstanding first day, making it through to the quarterfinals of the men’s competition and finished 17th overall.

Bias was the only one of the five Kiwis competing to make it out of the qualifying phase on the first day. He was second behind former world champion Sylvan Andre (France) in his opening moto, and then snuck through with fourth and last qualifying spot in the round of 16. The North Harbour rider, currently ranked 52nd in the world, rode a smart race to avoid some major collisions to finish third in his eighth-round before he was pipped by just 0.7s for the final qualifying place in his quarterfinal.

On the second day both Bias and Te Awamutu’s Cole McOnie made it through qualifying. Bias won his moto impressively while McOnie got through to the main draw in the last chance repechage, but did not progress.

Bias was second in the round of 16 but got squeezed out of the gate between two French riders in the eighth-round to finish 31st overall.

The New Zealand contingent, also including Rico D’Anvers, Rico Bearman, and Luey Cotton, will head over the Blue Mountains with two further rounds to be staged on another new facility at Bathurst this weekend, where junior world champion Jessie Smith hopes to make her season debut after sitting out Shepparton with ill-health.