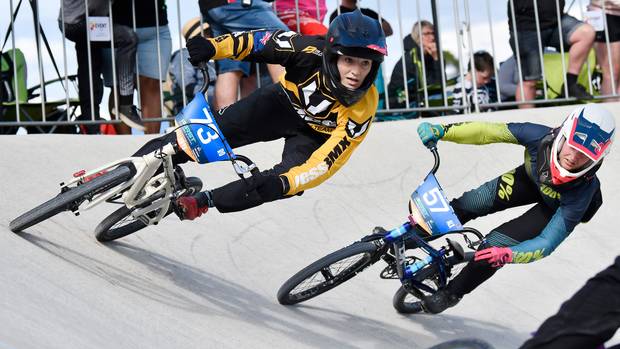 Rotorua BMX rider Megan Williams has high expectations for herself so it’s not surprise fierce competition could not stop her securing her sixth national title.

Megan went into the First Windows and Doors BMXNZ National Championships in Auckland at Easter weekend in good form, having won a round of the national series in Australia prior to the New Zealand championships, to win her class and claim the national girls 15 title.

“I had high expectations for myself, because I had won it in the past. I was feeling pretty good going into nationals but the competition is pretty fierce.

“I took a bit to get going in warm up and practice but once I was racing I found my rhythm. I usually have to use that warm up to get in the right physical and mental state for the race,” Megan said.

She was one of 18 Rotorua BMX Club riders at the event and half of the contingent earned top-eight placings.

Riders who obtain top eight results are classified as title holders and use national ranked plate numbers on their bikes.

Rotorua’s Caitlin Flavell was third in the supernats female 12-14 event and Kate Hastings was selected for the New Zealand Mighty 11s team to take on Australia in June.

Bellah Birchall is a reserve rider for that New Zealand team.

While winning is an obvious indicator of where a rider is at, Megan said there are other pointers to how she is tracking.

“You can tell from the riding and the numbers through the gym work, and you are trying to peak at the right times throughout the year.”

Megan will represent New Zealand at the 2019 UCI BMX World Championships in Belgium along with Newth and fellow Rotorua club member Will Skipper.

“Winning the national title is pretty important as well as being able to represent my country as the top female in my age group. The ultimate for most athletes is an Olympic gold medal – and a few world champs would be good too. I will have to stick to the hard work and put in the time and effort, but also make sure I stay enjoying it.”

“Rotorua BMX Club has had great results at nationals every year that I have been involved in the sport. Apart from the obvious, the dedication of the riders themselves and their parents for junior riders, part of the credit also needs to go to the committee for continually trying to provide the best facilities they can,” Stevens says.

“The club has always been based on the fundamentals of BMX – getting the basics right from as early as possible. We provide skill training where we can, but more-so, try to provide the opportunity to be as good as you want to be.

“We celebrate success in results, but also in effort, improvement, entertainment and being the good person.”

The club’s new track at Waipa is expected to be able to accommodate full training by the end of May.