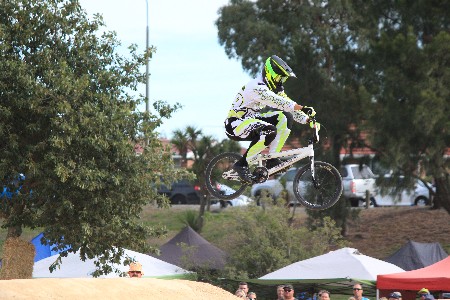 Trent Jones led the way for the Kiiwi BMX riders who all safely qualified for the finals day of the opening UCI Supercross World Cup in Manchester.

Jones, the North Canterbury rider now based mostly in USA, won his qualifying group with two wins and a second placing to push through to tomorrow’s racing indoors at the headquarters for Great Britain BMX.

Willers took no risks in the elite time trial for the top 16 men, clocking a comfortable 31.450s to set himself for racing tomorrow.

Jones was very impressive, winning his opening moto from gate 5, dominating from the prime gate 1 in the second and second behind talented Brit Tre Whyte in the final moto.

New Plymouth’s Cameron, who won the national championships at Easter, was forced to dig deep after a mishap in his first moto where he was sixth. He bounced back with third and then took full advantage of the No1 draw to win his final race to ensure qualification.

However both Kiwis face a daunting task tomorrow, drawn together in a group of death with multi world champion Sam Willoughby (AUS) and talented Americans Justin Posey and David Herman.

Franks managed some solid performances, second in his opening and final moto after a sixth in the second race.

Bias was a model of consistency, finishing third in each of his three rides.