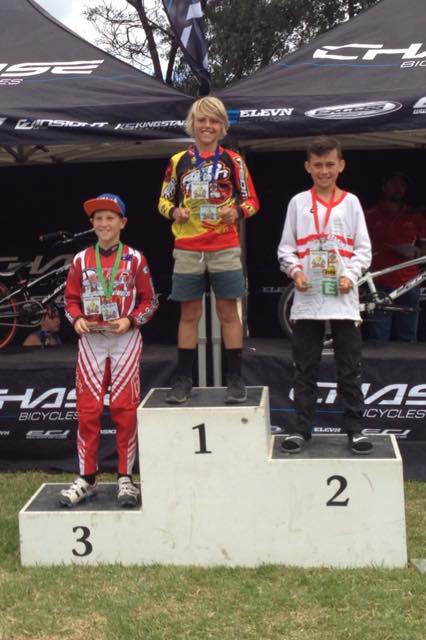 Congratulations to JAMES WHYTE on a successful campaign at the Track Attack series in Melbourne.   The following is a detailed report on his trip thanks to his dad Ken.

“Track Attack is a race series in Melbourne. It consists of six race meets over 9 days. It is well worth entering for James as because of the numbers and quality of riders in his age groups he gets up to 60 hard races over the six meets. 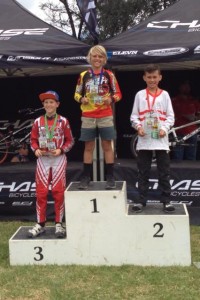 The weather was good at all meets except for a horrific muddy wet one at Frankston.

12 year boys had 31 or so riders. There were 3 motos, then quarters, semis and a final. The 11-13 Voucher class had only 15 top riders so the 3 motos were stacked and none were easy.In voucher there were the 3 motos and a final. After riding the 6th moto at each meet (a voucher one) quarters came up within 10 minutes from the last moto gate drop to the quarter gate drop. This was extremely brutal for the riders having to go straight from the finish line to staging, just having time for a drink on the way.

James results were mixed. In 11-13 Voucher he had 3 firsts, 4 seconds, 3 thirds, 2 fourths, 2 fifths, 2 sixths and 2 crashes. In finals he could only manage 3 sixths, two sevenths and did not make one. Rico and Kailen were stand outs with the rest of the riders having some mean battles in the pack. The Overall Rico won with Kailen 2nd and surprisingly James finished 6th overall behind Patrick Bognar, Flynn Hedley and Tyson Kenny.

In 12 boys James had a better time but still mixed results. 17 wins, 9 seconds, 3 thirds and a crash in a semi. In finals he got a second, 2 thirds, a fifth, a crash for 8th and didn’t make one because of his crash in the semi. Rico was again outstanding. Points are taken from motos and finals. After James nightmare on the wet 3rd race day at Frankston where he muffed every gate and crashed in the semi we’d given up any hope of getting anywhere and did not check score sheets. Quarters and semis were extremelty stressful. The aim was to take it race by race and to make finals. Luckily everyone felt similarly so you weren’t alone. There were a few tears. Initially from exhaustion and at Frankston exhaustion, frustration and disappointment. Almost every rider was feeling the pressure so again James was not alone. After Frankston the pressure dropped, a bit of fitness kicked in and the smiles came back whatever the results. James managed to get a second overall with equal points to Pat Bognar behind Rico in 12 boys. The ever improving Tyson Kenny was really close too as well as Joel Marsh who rode some mean races.

They have transponders in Australia. At Track Attack you could see your finishing times as well as your time about 3/4 down the ramp. They are really handy to see where your at and what you have to work on. James fastest times at each track apart from the wet Frankston meet were pleasing, not up with Rico or Kailen but within the top 4 riders.

All in all it was a very well worth while BMX trip, meeting nice people, James making new friends and with all the Kiwis doing well and some very exciting racing.”