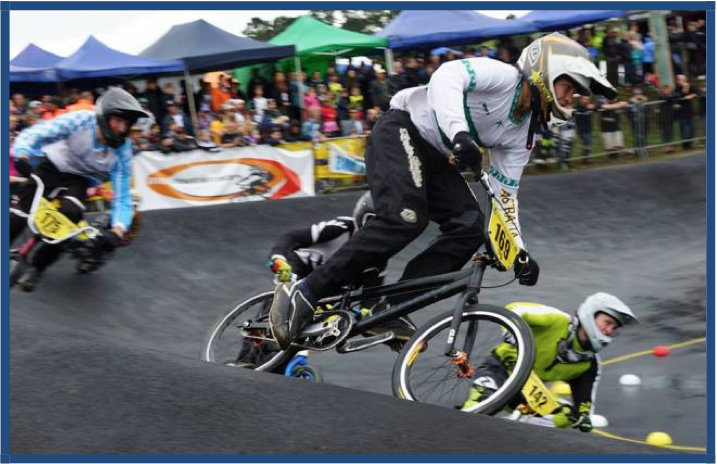 Finally Tauranga Club was able to Host the 2014 National Championships over Easter 2014. They were to host the 2011 Nationals but due to a number of circumstances out of the club’s control it was relocated to Auckland and the Tauranga club were granted the 2014 Nationals.

Since 2011 it has been a long, hard, sometimes challenging, but rewarding journey for the club to host a very successful National event this Easter and despite the hurdles we had to overcome due to the weather over the weekend.

Friday Racing was cancelled due to the torrential rain and thunder storms which resulted in moving all of Good Friday’s programme of Mighty 11 trials, opening ceremony and practice sessions, over to the Saturday, and cancelling the Saturday seeding rounds. On Sunday each class rode three mixed moto rounds and then into quarter, semi and finals.

Although the weather was not on our side the Tauranga Nationals Committee, Tauranga Club and BMXNZ hosted a very successful event with rider entries at 986 and spectators well into the thousands.

The club could not have hosted the Nationals without the help of itsmembers, BMXNZ, our generous sponsors and family and friends in the community over the past few years – thank you to you all.

In the couple of weeks leading up to the Nationals the committee was on task with all the little jobs getting completed and the weather was great, with sunny days, a little wind and the occasional drop of rain at night – great weather for final touches to the track and surrounds to ensure a great weekend of racing.

Unfortunately, on the Wednesday just prior to Easter it started to rain and by Thursday a storm was brewing with little chance that a break in the weather was going to come. It was therefore decided to postpone Good Friday’s programme of Mighty 11 trials, opening ceremony and practice sessions over to the Saturday, cancel the Saturday seeding rounds and on Sunday have each class ride 3 mixed moto rounds and then into quarter, semi and finals.

On Friday the rain continued to pour down, with most riders braving the rain to come to the track and collect their rider packs and have a sneak look at the track. On Saturday it looked like the rain was clearing and clubs started to erect tents while riders got some practices in. In the morning the Mightly 11 trials were held and went through with only a light shower or two. The weather was looking promising for a great afternoon, but, just as the opening ceremony was about to start and the first few regions had started the parade, the heavens opened up and the invited guests and dignitaries ran for cover under a pop for the opening ceremony.

After the opening ceremony the track remained in good condition and there were breaks in the weather so all riders got to have their practice sessions. 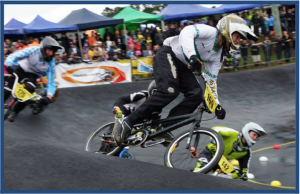 (Amateur Racing was fast and furious)

During the practice sessions and Elite racing there were a couple of spills and a soft spot appeared on the Elite section, which a handful of National Committee members and BMXNZ officials work late into the night to repair in time for Sunday’s racing. Thank you to you dedicated 10 families that stayed behind and helped, you did an amazing job.

On Sunday the rain was consistently on and off, but the track was still in good condition, so it was racing as planned. Three motos, quarters, semis and finals went along without a hitch and the 2014 NZ 1’s were decided. A great day’s racing despite the damp conditions.

We had a few issues with the parking paddock and people trying to stay dry but all in all it was a successful event. The Tauranga club ran a shop with hot chips, burgers, sausages, sweets and baking, and this kept a very dedicated bunch of parents on their toes all weekend – a great job guys, well done.

The BMXNZ officials and volunteers ran a very smooth event with everything running to time despite the bad weather, something we can all be proud off. Thanks to you all, without your dedicated help we could not have done it without you.

The club could not have hosted the Nationals without the help of itsmembers, BMXNZ, our generous sponsors and family & friends in the community over the past few years, thank you to you all.