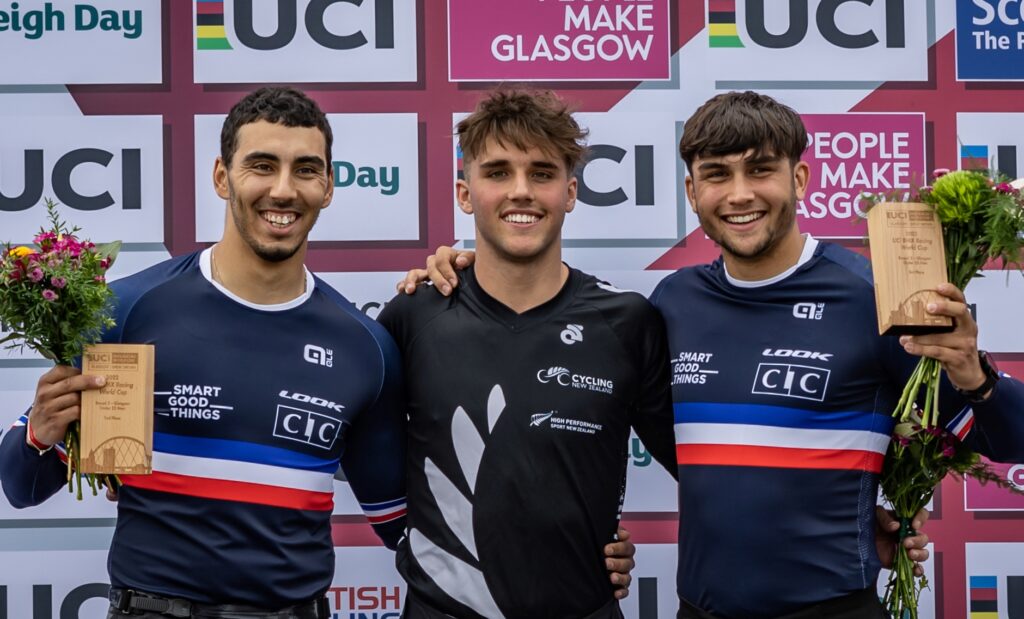 Auckland rider Rico Bearman produced a stunning performance to upset more fancied European rivals to claim the under-23 title in round two of the UCI BMX World Cup in Glasgow.

The World Cup series began with a double round at the new facility in Glasgow, which will host next year’s world championships. There were four New Zealand riders competing – Michael Bias (North Harbour) in elite, Megan Williams (Rotorua) in under-23 females with Bearman (North Harbour) and Rico D’Anvers (Cambridge) in under-23 men.

After winning his heat and all three match-racing rounds in the first day of racing, Bearman found himself cut off by a falling rider off the first big jump in the final. After taking evasive action he lost contact with the leaders to finish sixth.

He was again impressive in round two, winning his heat, eighth and quarter finals on round two, but only managed fourth in his semifinal to grab the last spot in the final.

“I got last pick and ended up in lane seven for the final. I felt that I had nothing left. I texted my father and said I had nothing in my legs,” said Bearman.

“But I gave it everything and nailed it. It was great to have my mother and father here and it was my father’s birthday so a good present. Now on to Papendal.”

Bearman was superb out of the gate in the final, making a daring move across the front of the pack to grab the holeshot. From there his skillset was immaculate, riding away from the field to claim his first victory in the World Cup under-23 division.

National elite champion Bias had an impressive weekend. In round one, he qualified in third in the heat but was edged out by 0.1s in the eighth round on Sunday. He went through in third place in the qualifying heat on day two, was fourth in the one-eighth round and an excellent third in the quarterfinal. Chasing a spot in the final, Bias was so close, finishing fifth by 0.01s to Frenchman Romain Mayet in the semifinal.

The next stop for back-to-back rounds is set for Papendal, Netherlands in two weeks.