The world ranked No 23 rider dominated the elite men’s class, winning all three of his motos after getting the jump out of the gate to claim the national title at the North Harbour BMX Club Track.

Te Awamutu’s Rebecca Petch was awarded the women’s title, winning the opening moto and finishing second in the other two races after fellow international Sarah Walker was relegated in the first race for cutting the line at the corner.

Walker, from the Rotorua club, bounced back, passing Petch on the third straight to win the second moto and then control the third and final moto.

There was a close battle for the elite men’s podium between Rico D’Anvers (Cambridge) and Luey Cotton (Kapiti), both part of the Schick Civil BMX Performance Hub. D’Anvers had two second placings and a third to finish second overall, one point ahead of Cotton. 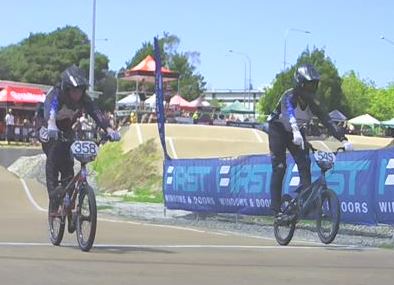 “That was my goal to be national champ today so I am stoked to pull off three consistent races and be crowned champion of New Zealand,” said Bias. “It wasn’t easy as everyone was biting at my toes so I am pleased to have three smooth laps. The main thing for me was to have three consistent gates. I’ll check the times after this but I was stoked with it.”

The disappointment came for Te Awamutu elite Cole McOnie who fell heavily in the opening moto.

Petch took out the opening elite women’s moto ahead of Walker and junior world champion Jessie Smith (Hamilton) with Walker later relegated. While Petch had the jump out of the gate in the second moto, Walker’s race-craft enabled her to pass on the third straight for the win, and then control the final moto.

“Today felt pretty good,” said Petch. “I was not obviously peaking for this event but I have been feeling like everything is falling into place and I’m tracking well for Europe. Firstly, we have the Oceania Champs later this month and then off to Manchester and the USA for World Cups.

“Sarah and I are riding well and hopefully we can do well in the world cups and get two spots qualified for the Olympics.”

Cambridge rider Tasman Wakelin, also a member of the performance hub, dominated the junior elite men with three impressive victories in times that would have tested the elite riders.

There was a battle for the podium with two other Hub riders, Rico Bearman (North Harbour) enjoying two seconds and a third to grab second overall ahead of Bennett Greenough (Cambridge) and Cooper Merito (Te Awamutu).

The elite riders will now look to the continuation of the international season with three double rounds of the World Cup Supercross in England, Netherlands and USA and the World Championships in Texas which is the final qualifying event for Tokyo.