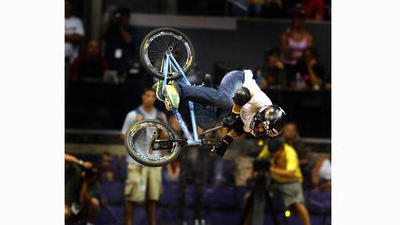 BMX bike rider Dave Mirra was found dead in his truck today in Greenville, North Carolina.  He was 41 years old.

Mirra, one of BMX’s biggest stars, helped bring the sport to the masses. He won 24 X-Games medals in his career. After retiring from BMX in 2011, Mirra became a rallycross driver. 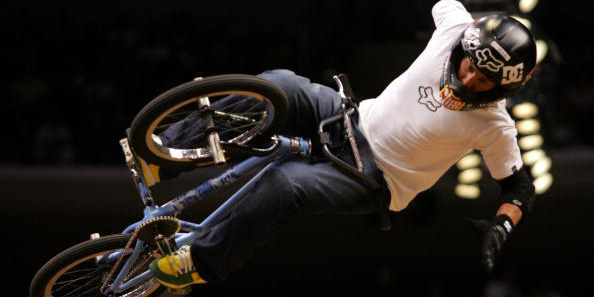 The Greenville police department confirmed Mirra’s death today in a post on its Facebook page. Mirra leaves behind his wife and two children. Below is an excerpt from the police report.

At approximately 4pm today, Greenville Police responded to the 200 block of Pinewood Road for an apparent suicide.

Upon arrival, officers discovered Dave Mirra, 41, of Greenville, sitting in a truck with an apparent self-inflicted gunshot wound. He had been visiting friends in the area a short time before the incident.

Considered an icon in the pro-BMX world, Mirra, was instrumental in bringing the sport to the City of Greenville, which now is home to more than 20 professional BMX riders. The record-holding athlete is survived by his wife and two children.

“We mourn the loss today of a great friend and wonderful human being who touched the lives of so many around the world with his gift. He called Greenville, North Carolina home and was as humble a guy talking with kids on a street corner about bikes as he was in his element on the world stage. A young life with so much to offer was taken too soon,” said City of Greenville Mayor, Allen Thomas.

The Greenville Police Department will be handling the death investigation.

Mirra was a beloved figure in the world of extreme sports, and his name headlined several BMX video games.  Until the 2013 X Games in Munich, he held the record for the most medals in history with 24. Of those, 14 were gold medals.

“Ironman competitions are an entirely different ballgame. The level of competition is much higher, and there are way more athletes,” Mirra told Sports Illustrated. He qualified for the 2014 Mont Tremblant Ironman World Championship in Canada.

“It was extremely satisfying to look around and see what I consider the best athletes in the world as my competition,” Mirra told the publication.

In Greenville, Mirra was credited for making the city a hub of BMX activity. More than 20 professional BMX riders call the city home, police said.

The mayor of Greenville, Allen Thomas, praised Mirra as “a great friend and wonderful human being.”

Mirra “was as humble a guy talking with kids on a street corner about bikes as he was in his element on the world stage,” Thomas said.