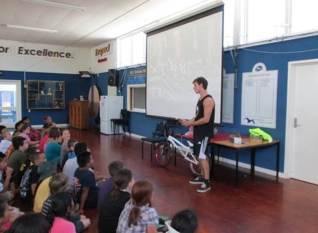 Nick Fox, Elite Rider visited 6 local Gisborne schools also a Kindy and a Coastal school over the past few weeks.

He has been promoting the sport of BMX hoping to inspire the younger kids of Gisborne to chase their dreams, especially when they are from an isolated area such as Gisborne.

Nick was also promoting the local BMX club’s open day during Bikewise Week which saw a massive influx of new riders who came to give BMX a go. This has led to a further growth in the club.
Nick was also asked to be the guest speaker at the induction of the Tairawhiti Rising legend Squad of 10 athletes. Nick was part of this squad for three years and found it invaluable both with life/career planning, nutritional guides and Phycholigal assistance. Nick was also assisted finacially by both TRL and Sport Gisborne, It was a great opportunity to give something back and thank them for this assistance as well as pass on to this group of athletes how it assisted him then and thoses same skills help him still

Nick soon leaves to NZ to train and compete around the ABA circuit in America -we wish Nick all the best. Watch Nick’s website www.nick-fox.com for updates on Nick’s year.